Lifelong bonds built on a cross-country train: Korea and Asean celebrate 30 years of relations with a trip

Lifelong bonds built on a cross-country train: Korea and Asean celebrate 30 years of relations with a trip 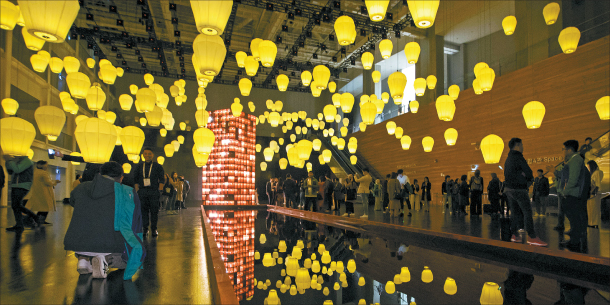 The special exhibition “Light of Asean, One Community and Harmony” at the Asia Culture Center in Gwangju opened Thursday, in time for a visit by delegates from Asean countries and Korea traveling together to celebrate 30 years of relations. [ASEAN-KOREA CENTRE]

GWANGJU - To celebrate 30 years of relations between Korea and the countries that make up Asean before the Korea-Asean special summit takes place next month, the Asean-Korea Centre hosted a special train trip last week.

Along with about 200 people from Korea and 10 Asean countries including Vietnam, Thailand and the Philippines, the center led a three-day trip to Busan; Gwangju; Gyeongju, North Gyeongsang; Suncheon, South Jeolla and back to Seoul. This year also marks the 10th anniversary since the center was established.

Prior to the special summit scheduled to happen from Nov. 25 to 26 in Busan, the center invited experts in many different fields ranging from political science to economics and cultural industries, to provide delegates a chance to mingle and share what’s trending in each country.

“The special summit in Busan next month will provide a chance to review the relationship between Korea and Asean countries and to suggest the vision for the next 30 years,” said Foreign Minister Kang Kyung-wha at a ceremony held at the end of the train trip.

The highlight of the three-day trip for many of the guests was Gwangju. The city’s Asia Culture Center kicked off its special exhibition “Light of Asean, One Community and Harmony” on Thursday.

The exhibit features a kinetic art piece made up of around 300 lights that move up and down from the ceiling. The piece was inspired by the practice of releasing things into the sky to make a wish that is common all across Asia.

Since the practice is usually conducted with a large group of people in the same village or community, the artist made that part of the experience as well. Visitors can touch pillars set up in the gallery, and when multiple pillars are engaged, the lights hanging from the ceiling move more quickly and shine bright, showing the power of cooperation.

“It is important for people to know Korea has more than K-pop and movies” said Seksan Anantasirikiat, a researcher at a non-governmental think tank for national strategies based in Bangkok who got his master’s degree in political science at Seoul National University and participated in the train trip.

While traveling across the country via train, over 200 participants got to enjoy cultural performances in Suncheon, South Jeolla, left, and on the train, right, in the hopes of strengthening ties between Korea and the countries that make up Asean. [ASEAN-KOREA CENTRE]

“Understanding the relationship not only between Korea and Thailand, but also between Korea and the Asean countries overall is what I am doing, and I hope more people try to see the other things Korea has and is doing.”

Mishka Antonette Reyes Camulte from the Philippines, who has lived in Korea for the past eight years, feels that Korea is opening up more to accommodate the needs of foreigners living in the country.

She was told that older people may not be used to having non-Koreans around because Korea has long been a homogenous country, but she said that she doesn’t really feel like she gets any unfamiliar looks from anyone while in Korea. Her father-in-law, who is a pianist who has been working in various hotels across Korea for over 20 years, also has close ties to the Korean community.

“I even met my husband here in Korea, and he proposed here,” said Camulte. “How can Korea not be special for me?”

She and her father-in-law performed as a duo on the train in order to share some of their culture with the others traveling from elsewhere in Korea and other Asean countries.

“The train trip was put together to show that people want people-centered peace and prosperity seen in the communities involving Korea and Asean countries,” said Lee Hyuk, secretary general of the Asean-Korea Centre. “We wish that the ties among the countries get deeper thanks to the mutual trust and friendship built by citizens.”