Traditional Korean for a new age: After years in the kitchen, chef Cho Hee-sook now runs a restaurant

Traditional Korean for a new age: After years in the kitchen, chef Cho Hee-sook now runs a restaurant 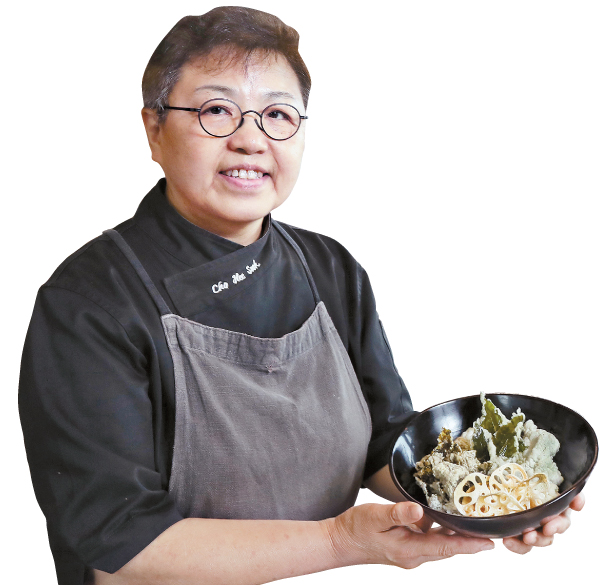 The chefs’ teacher, or chefs’ chef, is a title that chef Cho Hee-sook has maintained over the years, especially among cooks trying to perfect a modified version of Korean food.

With more foodies around the world looking for something different during their travels to Korea as well as locals enjoying familiar tastes in finer settings, the genre known as modern Korean has become popular in Korea. Chefs who studied French or American cooking techniques in school and during their time working overseas craved some guidance on how to better use local ingredients to make their food feel a bit more Korean, and they reached out to local experts of Korean food. One of them is Cho.

Chef Cho is one of the few female experts who still works as a chef in the kitchen. Many other women in the industry work as critics or run cooking studios. She spent about 36 years working at hotels and restaurants.

Throughout her career, Cho was known as a rebel in the kitchen. She has always been willing to think outside the box and unafraid to break glass ceilings. Her unique perspective had helped her find ways to make simpler, more approachable versions of classic Korean dishes, and that captured the attention of many of the big-name chefs making modern Korean food. Chef Kang Min-goo of Mingles, Shin Chang-ho of Joo Ok and many more have spent time with Cho to learn from her, better understand old recipes that they are not familiar with and pick up any tips she has acquired over her decades of work.

Some of the dishes available at Hansik Gonggan are featured above. While Chef Cho Hee-sook uses traditional cooking techniques passed down through the years, she always keeps the final look of the plate modern and simple. [PARK SANG-MOON, LEE SUN-MIN]

Despite having spent years in the kitchen, up until very recently, Cho had never owned a restaurant of her own. Instead, she was focused on running Hansik Gongbang, a studio that researches food and recipes.

But now, she is the owner chef of Hansik Gonggan, a restaurant she provided consulting to when it opened two years ago. Last year, the restaurant was awarded a Michelin star. Its unique location, right next to Changdeok Palace where diners can enjoy a view of traditional hanok buildings outside the window, also helped the restaurant become known as one of the best places to try Korean food.

At Hansik Gonggan, Cho makes a modern version of classic Korean, different from other food served at so-called modern Korean restaurants, which is more focused on using Korean ingredients cooked with foreign cooking techniques. She prepares everything on the menu in a traditional way using techniques that have been handed down for generations, yet adds modern touches to make the dishes appealing to many modern-day diners.

“I want to keep the traditional style while trying to have the sense many modern-day people feel in food,” said Cho. “I wanted to show that food with many Korean elements isn’t just part of culture, but also part of the commercial industry.”

The restaurant Hansik Gonggan is located right next to Changdeok Palace and provides a picturesque view during the day for diners. [PARK SANG-MOON]

The Korea JoongAng Daily recently met with chef Cho to discuss her transition to becoming a restaurant owner and her plans for the future. The following are edited excerpts from the interview.

Q. How does it feel to be the owner of a restaurant?

A. It is my first time really running a restaurant. I did almost everything as a manager of a kitchen, but it is the first time really getting the title of owner. The most difficult thing is to keep the quality of food I want, while also thinking about what customers want and what the employees of the restaurant want. In the past, I only focused on what I could give customers, but now it’s all about balance so that better service can also be accompanied.

Why did you decide to take over the restaurant?

I thought if I didn’t stand up, no one would do so, and the style of Korean food I have worked to make may just go away. I did almost all the settings at this restaurant so it was also easy to take over. The people who started this restaurant are still all here, and the people I worked with at my cooking studio are now all here too.

What kind of restaurant do you want to make?

What are you most surprised about after running the restaurant for the past month?

When I try something new, customers seem to welcome that. Creating something new is never easy, and it is sometimes self-torture, but the result is so satisfying. Just like how some people who climb mountains feel that sense of accomplishment when they get to the top and come down, I’m delighted to see immediate feedback from customers, and that pushes me to do more research and try more new things. I will treat this restaurant as a place where I present well-made Korean food, not a place where I present my food.

Are you thinking about using this restaurant as your work studio as well?

It would be the ideal scenario, but not at the moment. I need to focus more on making this place commercially successful. I need to put all my power into making that happen first. If that works, then I would be able to gain more momentum to study, research and share what I know more often.

What does Korean food lack that prevents it from going global?

We need to have something like pizza from Italy. We need something that’s easily approachable, yet part of our long history. We need to see the market from many different angles to develop an item that’s part of a culture.

In that sense, what dish do you think has the most competitiveness?

I think jeon can do that. (Jeon is a Korean-style pancake with vegetables, seafood or meat added to the flour dough.) The ingredients to make jeon are easy to find anywhere in the world. That’s important because even when your final product is Korean, the fresh ingredients that are put into that dish need to be local. You add condiments to make the ingredients taste more Korean.

Do you think it is essential for the government to take part in promoting Korean food?

When the government uses its budget to invest in something, it means that an industry will grow. It means that the government wants to use food as a medium to bolster the economy, while also spreading the word about Korean culture. If that works well, it becomes easier for [chefs] to go abroad and make something. I have heard Korean food is getting more popular these days in New York. The government may have tried to make Korean food go global a bit too early [when the world wasn’t ready]. Now might be the good time to be more aggressive and make food items that make ingredients found overseas taste like Korean ingredients. We need to help make ganjang (soy sauce) or kimchi made by Korean companies more well-known for better sales. Now is the time to give one more push to grow the industry.