“To the Moon with Snoopy,” held at the Lotte Museum of Art through March 1, features sculptures, paintings and even clothing inspired by American cartoon icon Snoopy and the first moon landing, which celebrates its 50th anniversary this year. Snoopy has served as the safety mascot for NASA since 1968, just before the Apollo 11 mission. [LOTTE MUSEUM OF ART]

Countries around the world have been celebrating the 50th anniversary of the first manned moon landing, which fell on July 20. Museums like the Grand Palais in Paris took a serious approach to the Apollo 11 mission with a show focused on representations of the moon throughout history.

The Lotte Museum of Art in southern Seoul is on the lighter side with its exhibition entitled “To the Moon with Snoopy.”

The iconic beagle of the American comic strip Peanuts has more to do with space travel than many would realize. Executive Vice President Roz Nowicki of Peanuts Worldwide, which licenses the comic strip and its brand, came to Seoul on Oct. 15 to talk to the press about the 50-year partnership between Snoopy and NASA.

“In 1968, Snoopy was made the safety ambassador for NASA at a time when it was having some challenges with its astronauts program,” Nowicki said, referring to accidents that rattled the space agency in the mid-1960s.

“[NASA] thought Peanuts would put a nice human face on the moon mission. Snoopy also made kids excited about the space program,” she added.

“To the Moon with Snoopy” opens with a detailed history of the Peanuts character’s connection with NASA since Apollo 10, the dress rehearsal for the moon landing. In a room designed to look like a spaceship, this part of the show tells how the Apollo 10 crew gave the nickname “Snoopy” to their lunar module - because it will be “snooping around” the moon - and presents photographs of the time, including one of an astronaut petting a huge stuffed Snoopy doll just before embarking on a mission. 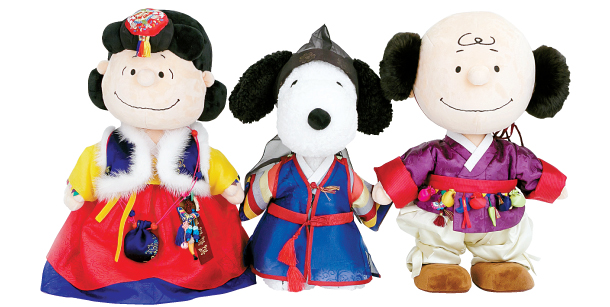 After familiarizing visitors with the connection between the famous cartoon dog and the journey to the moon, “To the Moon with Snoopy” goes on to present the highlight of the show, “Contemporary Art and Snoopy.” This section is filled with brand new paintings, media art, sculptures and even comic strips produced by around 15 Korean contemporary artists who drew inspiration from Snoopy and the moon expeditions.

Lee Dong-gi and Yee Soo-kyung’s pieces are especially eye-catching as they merge Korean aesthetic styles with the American icon.

Lee, for example, chose to feature Snoopy alongside imagery from a work by Joseon era (1392-1910) painter Kim Hong-do, while Yee combined broken ceramic shards to create new shapes reminiscent of a dog and a giant moon.

Works by Korean graffiti artists are on show in the “Street Art and Snoopy” section.

In a move to attract more visitors, Lotte also enlisted the help of celebrities and fashion designers to paint their own Snoopy figures and design outfits for plush dolls.

Boy band Exo’s Chanyeol, singer-songwriter Seo Samuel and actress Ha Yeon-soo are among the stars whose painted Snoopys are prominently on display. 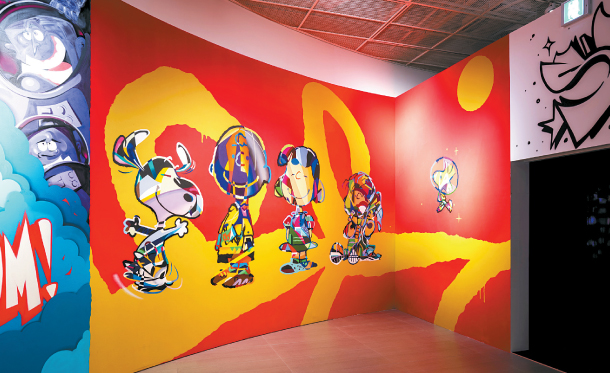 “Peanuts Beats” by Madvictor is a spray paint piece that features Snoopy and other Peanuts characters in the style of street art. [LOTTE MUSEUM OF ART]

Fans have the chance to take these celeb creations home - for a price. From this Saturday, Lotte will be holding a silent auction in which visitors can submit bids in a designated box. The winners will be announced in February and all proceeds go to the non-profit World Vision, one of the sponsors of “To the Moon with Snoopy.”

This collaborative exhibition was made possible with Peanuts Worldwide and the Charles M. Schulz Museum, which is dedicated to the late creator of the Peanuts series.

Schulz was extremely proud of his characters being associated with the moon shot and considered the partnership with NASA one of his greatest achievements.

“I suppose receiving the two Ruebens [a cartoon award] pleased me more than anything else, but I think having Snoopy go to the moon was the greatest triumph of all,” reads a 1986 quote from the artist in the Lotte exhibition. “This is because cartoonists have been sending their characters into space for years in their stories, but mine was the first character who really went to the moon.”

Thanks to Schulz’s passion, Snoopy is expected to be a prominent presence in America’s space program for a long time. Peanuts Worldwide and NASA signed a multi-year Space Act Agreement last year for the space agency to use the cartoon characters on a more extensive scale, and the Silver Snoopy pins, first launched in 1968, continue to be awarded to astronauts who make notable contributions to human space flight.