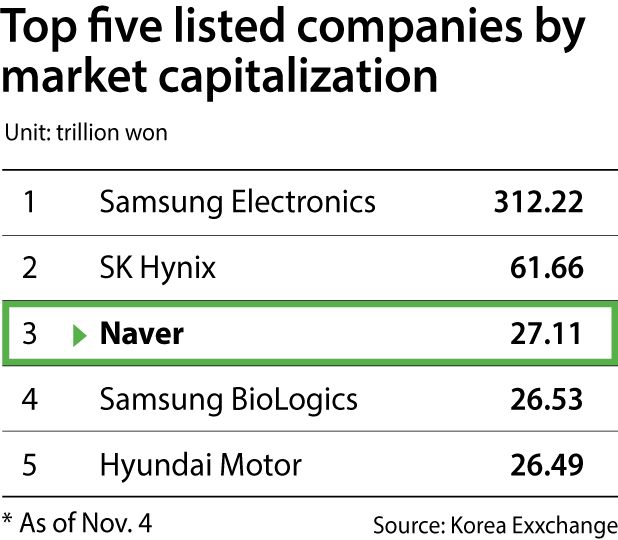 Major IT companies are enjoying double-digit profit growth as they introduce new services and report gains in the provision of content.

Naver, with a 73.36 percent stake in the Line messaging app, is now the third largest listed company in the country by market capitalization following its third quarter earnings announcement last Thursday. It follows Samsung Electronics and SK Hynix, and it is now ahead of Hyundai Motor and Samsung BioLogics.

The company, with strong revenue growth in its platform and content businesses, reported operating profit rising 57.7 percent on quarter to 202.1 billion won ($174.2 million).

Naver’s rise reflects a global trend where tech companies beat out old-school manufacturers in the stock markets. The company closed at 164,500 won, up 39.4 percent compared to the beginning of the year.

Naver’s move to expand into financial services will likely gain momentum with the inauguration of Naver Financial last Friday.

Artificial intelligence (AI) played an integral role in bringing online shoppers onto its shopping platform, with the AI-powered recommendation feature.

“We expect the company’s search ads and shopping revenue based on search, payment, and AI recommendations to maintain strong growth,” said Lee Chang-young, an analyst at Yuanta Securities, adding that the AI recommendations account for over 10 percent of total shopping transactions.

The analyst noted that IT services and domestic and overseas webtoon sales and new advertising channels will boost profit in the fourth quarter.

The shares of Kakao, operator of the KakaoTalk instant messenger and Daum, also did well as it reported strong performances in finance and advertising.

Kakao’s stock is up 43.6 percent from the first trading day of the year.

“Kakao’s earnings will likely reach a record high in 2020,” said Hwang Seung-taek, analyst at Hana Financial Investment, “as it continues to see high growth in advertising, commerce and content businesses.”

The rise of the tech companies translates to gains for executives.

The value of Kakao Chairman Kim Beom-su’s stake jumped by 37.4 percent to 1.77 trillion won as of Nov. 3, while that of Lee Hae-jin, Naver’s founder and global investment officer, rose 34 percent to 1.01 trillion won.