Top chef takes diners on a journey in Korea

Top chef takes diners on a journey in Korea 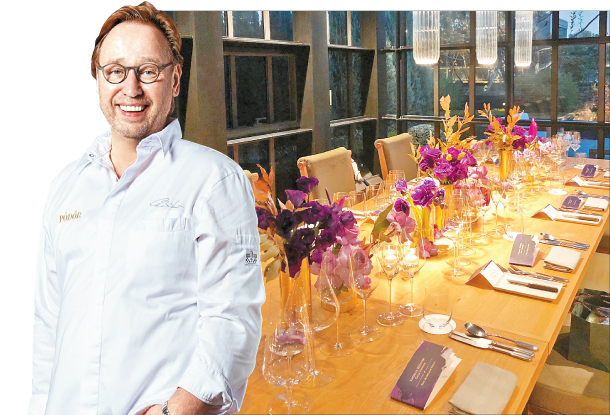 German chef Thomas Buhner, who had previously earned Michelin three stars at the now-closed restaurant La Vie, won over the hearts of foodies in Korea this week. The chef, who has held a handful of gala dinners in Korea over the past decade, was back in Seoul to make three dinners with Marriott International.

Beginning with dinner at JW Marriott Seoul in southern Seoul on Monday, he continued to meet diners from all over the world at JW Marriott Dongdaemun Square Seoul in central Seoul, and he finishes his journey at the Sheraton Grand Incheon tonight. The events are planned to cater to loyal members of the hotels under the umbrella of Marriott International. Called Marriott Bonvoy, the membership program offers its guests a chance to be part of many travel experiences, including dining at prestigious food spots. All the dinners are served with wine paired to each dish, and some of the dishes greatly captured the eyes of diners who are used to the Korean-style dining habits, such as eating food with soup.

For the first two dinners, the chef prepared steamed wild cod and fat tuna in warm cod consomme with saffron to start. The menu changed from one dinner to another. The chef, who has traveled to many different countries, mixed and matched ingredients available in Korea with others more commonly used overseas.

Some of the highlights from the course meal prepared for the dinner at JW Marriott Seoul, the first of three dinners Buhner served during his stay in Korea. [LEE SUN-MIN]

One of the main dishes that got the most attention during the first dinner at JW Marriott Seoul was grilled hanwoo (Korean beef) steak. While the beef itself may not be new to many, the beef consomme served in a small cup definitely piqued the interest of everyone in the dining room. Diners were asked to freely use the soup, even to dip a piece of meat into it. Dipping the meat in the soup reminded many local diners of the dining culture found in Korea, having rice and soup as a staple in a daily meal.

“You can’t say when the influence starts,” said Buhner during an interview with local media Monday, explaining how he implemented some of the things he became familiar with for the dinners he was preparing. “I was impressed by the quality of [ingredients here through previous visits], and I have gained a better knowledge of the products Korea has.”

He wants to offer an experience in which people are wowed as they eat. The jaw-dropping wow, he thinks, should come not just from what’s on the plate, but with the ambience, service, and quality glasses and tableware. To make that happen, he thinks creating a relationship with the city he is in is important to provide diners an experience they can better relate to if they are locals or feel for the first time if they are traveling.

“I would like to take the guests on the journey with me to every corner of the restaurant,” he said.

The chef is currently self-employed. He has been consulting for many different companies, including airlines that need advice on their catering service, and hospitals.