Fairy tales come to life at night in Seoul: Let your imagination run wild while visiting the colorful lanterns along Cheonggyecheon

Fairy tales come to life at night in Seoul: Let your imagination run wild while visiting the colorful lanterns along Cheonggyecheon 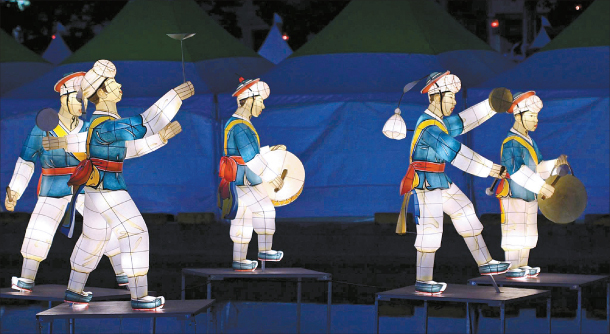 Figure out which fairy tale you would most like to live out this month while walking down Cheonggyecheon, one of central Seoul’s most popular destinations for tourists and a place that many locals visit to enjoy a light walk.

At night, the stream is adorned with radiating fictional characters from local fairy tales or animated movies like the “Wizard of Oz” and “Aladdin” to celebrate the Seoul Lantern Festival until Nov. 17. Held annually since 2009, the event now attracts about 2.5 million visitors a year, making the festival one of the biggest events for Seoul during the colder months.

This year’s theme is “Seoul, Your Fairy Tale,” and the Seoul Tourism Organization decided to offer visitors a chance to live out their fairy tale fantasies while they walk along the stream. The lights are set up from Cheonggye Plaza to Supyo Bridge, which is about 1.2 kilometers (0.75 miles) long.

The lanterns depict fictional characters from 23 different local or international stories, popular movies or animated shows, such as “Tayo the Little Bus,” as well as “The Little Prince,” “Alice in Wonderland” and “Cinderella.” Many characters from old Korean fairy tales like “Gold Ax or Silver Ax” or “A Fairy and a Woodman” are recreated as lanterns as well. Many visitors spend their time walking through the festival taking photos with their favorites.

The Seoul Lantern Festival decorates Cheonggyecheon in central Seoul with dazzling, colorful lights. Human-sized lanterns in traditional Korean garments and playing musical instruments, top, or fictional characters and objects from fairy tales like Cinderella, above center, The Little Prince, far right, and Alice in Wonderland, below, fill up the famous stream. There are also media art pieces, above left, and lanterns depicting the Korean folk tale “The Sun and the Moon,” above right. [SEOUL LANTERN FESTIVAL, LEE SUN-MIN]

Next to each character, there is a small screen providing more details about their story. Some of the screens have sound and tell a part of the whole story. Most of the narration is in Korean, but some also tell the stories in English.

On one of the bridges that connects one side of the stream to another, there are countless cheongsa chorong lights hanging, or square lanterns covered in red and blue, the colors symbolizing the harmony of yin and yang. Other lanterns feature other iconic items from the Korean history, such as admiral Yi Sun-sin (1545-98) and his turtle ship that led Korea to win in a battle with Japan in late 1500s during the Joseon Dynasty (1392-1910), and King Sejong (1418-1450) who created the Korean alphabet known as hangul.

Besides these lanterns, there are some media art pieces along the stream that provide for more photo-taking opportunities. Phrases like “Love Mom and Dad,” “I’m like a star, you are like the moon,” are used to make media artworks, making the pictures fun to send to family and friends. 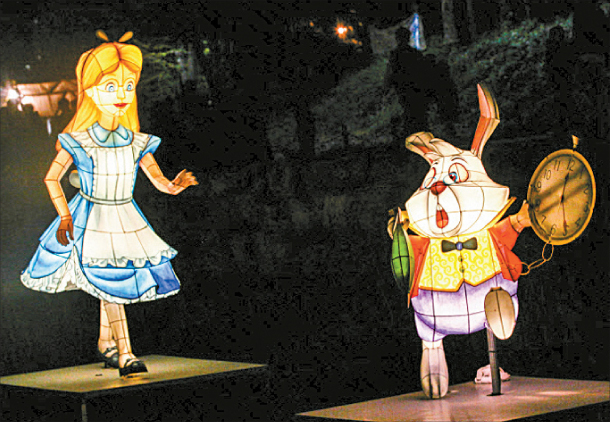 You can also try to make your own lantern at tables set up along the walkway. You will be given a piece of paper on which you can write out a wish. Afterwards, you can put that onto the boat-shaped LED light. You can let it go at one end of the stream and watch it float along the stream with the other blue boats with all kinds of wishes. The lanterns cost 5,000 won ($4.32), while other lanterns featuring scenes from the fairy tales cost 10,000 won. Some of the merchants at the festival sell glowing balloons, a popular choice for children, for 15,000 won.

Seoul Lantern Festival runs through Nov. 17 alongside Cheonggyecheon, from Cheonggye Plaza to Supyo Bridge. Seoul Tourism Organization estimates that visitors spend an average of one at the festival, so plan accordingly. The lights are lit from 5 p.m. everyday and stay on until 10 p.m. from Mondays through Fridays and 11 p.m. on Saturdays and Sundays. The festival is free and guided tours in Korean, English, Chinese and Japanese are provided More information on the guided tour can be found at the Information Desk at Cheonggye Plaza. For more details about the festival, visit www.seoullantern.com or call (02) 3788-0856.