A bright future for Korea in the Pacific Islands

A bright future for Korea in the Pacific Islands 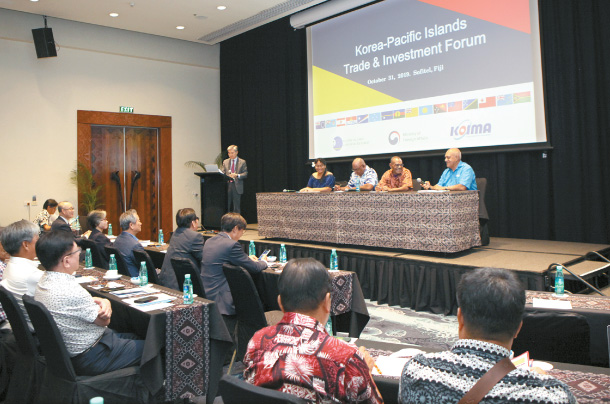 NAVI, Fiji - The first Korea-Pacific Islands Trade and Investment Forum hosted by the Korea Importers Association (Koima) and sponsored by the Korean Foreign Ministry was held at Sofitel Hotel in the tourism town of Navi, Fiji on Oct. 31.

Some 40 to 50 businessmen and women and government representatives from the Pacific Islands including Fiji, Samoa and Vanuatu as well as Korean businesses attended the forum that was held in the hope of expanding business ties between Korea and the Pacific Islands.

While major Korean business organizations including the Korea International Trade Association (KITA) or the government-owned Korea Trade-Investment Promotion Agency (Kotra) also send its own business delegations, these organizations have not yet traveled to the Pacific Islands.

Koima Chairman Hong Kwang-hee said he strongly believes that his organization’s delegation not only opens business opportunities for its members but actually helps the Korean government’s diplomatic efforts.

“Since long ago, importers traveled across the world to find business opportunities,” Hong said. “We are in some ways acting as representatives of a country.”

The Korean delegation’s trip to Fiji is the third business trip organized by Koima.

Tuimauga stressed the easy regulatory process in starting a business in Samoa, which she says takes three to five days.

“The registration can be done online,” Tuimauga said.

“Right now, our investment policy is under review and that will see a lot of changes, and this will see big encouragement for the private sector,” said Vuti from Vanuatu. “Investment opportunities in Vanuatu, we are looking more into agritourism.”

According to Koima, this year delegations of its members have taken three major trips overseas.

In July, some 100 or so members of the importers association traveled to the Philippines, while in September, eight Korean businessmen and women visited Uzbekistan, Georgia and Azerbaijan.

Unlike KITA or Kotra, which focuses on exporting Korean goods, Koima, which is one of the oldest business advocacy groups founded in 1970 with over 8,000 members, primarily focuses on connecting Korean companies that import overseas goods to Korea. Most importing is for industrial purposes, including raw materials such as natural resources.

“Business forums [like Koima’s] are important in establishing a business opportunity for Korea and the Pacific Islands,” said Korean ambassador to Fiji Cho Shin-hee.

The Pacific Islands’ total trade has grown an average 20 percent annually over the past five decades and the trade-to-GDP ratio has grown from 17 percent to 52 percent between 1960 and 2017.

However, despite the gradual growth, trade with Korea and the Pacific Islands has seen little increase.

But the Pacific Islands are expected to play a larger role diplomatically for the Korean government.

Each and every one of the 12 Pacific Island countries has a vote on the United Nations. Building up favorable relations with the Pacific Islands could help Korea secure stronger support on major issues raised at the UN.

At the UN, numbers matter - superpowers like the United States, China and Japan all have a single vote at the UN, and even the Asean countries only have a combined 10 votes.

The Moon Jae-in government has raised its interest in the Pacific Islands especially this year, starting with the Korean Foreign Ministry launching the Korea-Pacific Islands Trade and Tourism Promotion Project in March.

The Korean Foreign Ministry has been providing $1.1 to $1.2 million in funding to the Pacific Island Forum (PIF) that is based in Suva, Fiji, every year since 2008, half of which is spent on researching climate change, while the other half is used to fund tourism and businesses.

This year, under the trade and tourism project banner, part of the PIF funding financed the Koima business forum.

“It is the strong wish of the Korean government to remain a true partner to the Pacific Island countries for their socio-economic development,” Vice Foreign Minister Lee Tae-ho said during the launching ceremony for the Korea-Pacific Islands Trade and Tourism Promotion Project in March.

Additionally, the Korean Foreign Ministry on Oct. 15 held the 6th Korea-Pacific Island senior officials meeting in Busan, where 13 countries from the region participated in discussing trade and tourism cooperation. This meeting has been held every three years since 2011.

The Korean government’s ramped up efforts follow the growing expansion of Chinese influence in the Pacific Islands.

A large delegation of government officials and businessmen was led by China’s Vice Premier Hu Chunhau.

“The forum was crowded,” said Howard Politini, chair of the Pacific Island Private Sector Organization. “[Chinese government officials] even had a quick meeting in Suva [Fiji] before returning to China.”

He said the growing Chinese business presence is felt in every corner of the Pacific Islands, from infrastructure to building construction and even in retail.

“In Samoa, while the land owners are Samoans, the operators of supermarkets are Chinese,” Politini said, adding that the Pacific Islands are welcoming the interest from China as it is benefiting the countries through investment and job creation.

“If you go everywhere in Fiji, you can see Chinese construction companies building roads and other infrastructure,” Cho said.

It has been reported in Chinese media that bilateral trade between China and eight Pacific Island countries last year amounted to $4.3 billion, up 25 percent compared to the previous year. Additionally, China’s direct investment totaled $4.53 billion.

China’s increased economic investment has helped raise its favorability in the region, as the Solomon Islands and Kiribati cut ties with Taiwan to side with China in September.

Taiwan now has only 15 allies, according to AP, a stark contrast to the 180 countries supporting China.

“China, on the government level, is making huge investments for strategic and political purposes,” Cho said. “[Korea] is making its own investments,” she added. “On top of the PIF funding, we also invest [in the Pacific Islands] through Korea International Cooperation Agency [Koica] official development assistance [ODA], mostly in renewable energies such as solar panels.”

Recognizing the swift change in the region, the United States is also increasing its socio-economic relations.

Graham Clark, the CEO of Fiji Sugar, expressed interest in reentering the Korean market during the Koima delegation’s visit.

Clark said his company supplied sugar to Korea, which was repackaged for sale here, two years ago.

Clark told the Korean delegation that he is hoping to enter the Korean market but with a different strategy. While previously the company exported sugar in bulk, he hopes to introduce Fijian sugars to the Korean retail market in smaller packages that accentuate premium quality.

“Our sugar has no impurity and it’s natural sugar,” Clark said, adding that it produces 200,000 tons on average a year and is currently targeting increasing production to 350,000 tons.

Clark’s sugar caught the attention of Park Mi-ra, the CEO of Kosco, a company that imports and supplies raw materials for major Korean food companies including Lotte and CJ.

Park said the Koima business delegation to Fiji is a great opportunity for her to search for business opportunities in places that are otherwise difficult to reach.

“There are not many opportunities for a business person to travel alone to places like Fiji,” Park said. “But the Koima delegation has been a great change to seek new business partnership.”

Cornelia Wyllie, CEO of Fine Foods, also said she was interested in accessing the Korean food and beverage market.

Fine Foods, which is based in Vanuatu, manufactures food products including feijoa juice and tomato sauce.

Wyllie said that while her company’s products are mostly concentrated in Oceania, including New Caledonia, New Zealand and Australia, she hopes to expand her business to the Asian market.

Wyllie showed interest in the agreement between Korea and the Pacific Islands on duty free trade.

The delegation also visited the Essence Group Fiji, a cosmetics and beauty care company, which earlier this year grabbed international attention after a celebrity stylist introduced the company’s nama, or sea grapes, product during the Emmy Awards via instagram.

“While we could have done better, one can’t be completely satisfied with the first try,” said Hong. “Yet it was a good opportunity as several governments and businesses [from the Pacific Island] have expressed interest.”

The Koima chairman stressed the need to continue the exchange of information to help establish trust that will contribute to larger business opportunities between the two regions.

“We have 8,000 members that are engaged in a wide range of businesses from raw material imports to parts suppliers,” Hong said. “The information that we collect here will likely raise interest for some of our Korean members.”

Korean ambassador to Fiji Cho said that while many major Korean companies consider the Pacific Islands a market that’s too small to enter and worry that the lack of infrastructure will be a burden, she believes the untapped and underdeveloped natural resources offer a vast pool of opportunities.

“Some of the Korean businessmen here are trying to cultivate the agricultural goods and export them to other nearby markets like Australia and New Zealand,” Cho said.

Cho cited Fiji Water as one globally successful example. The California-based bottled water company is one of the highest grossing premium water brands in the world, competing with other major brands such as Evian.