Famed London photographer is dead at 81

Famed London photographer is dead at 81 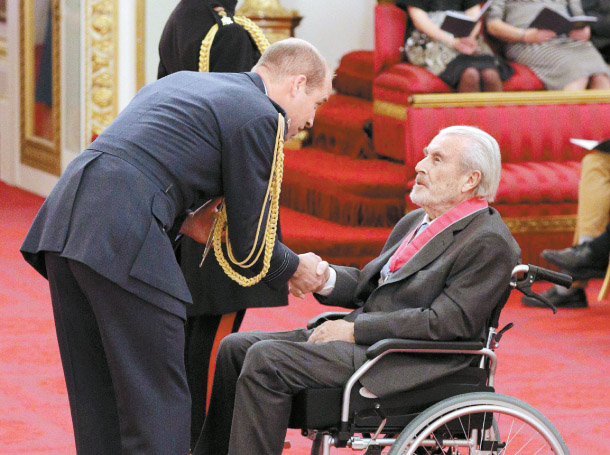 Terry O’Neill being awarded Commander of the Order of the British Empire by Britain’s Prince William at Buckingham Palace on Oct. 22. The accomplished photographer died Saturday at his home in London following a battle with cancer. [AP]

O’Neill died Saturday at his home in London following a long battle with cancer, according to Iconic Images, the agency that represented O’Neill.

“Terry was a class act, quick witted and filled with charm,” the agency said in a statement posted to its website.

“Anyone who was lucky enough to know or work with him can attest to his generosity and modesty. As one of the most iconic photographers of the last 60 years, his legendary pictures will forever remain imprinted in our memories as well as in our hearts and minds.”

Born in London in 1938, O’Neill was working as a photographer for an airline at Heathrow Airport when he snapped a picture of a well-dressed man sleeping on a bench. The man turned out to be the British home secretary, and O’Neill was hired by a London newspaper.

In the early 1960s he photographed the Beatles during the recording of their first hit single, and he captured the image of former Prime Minister Winston Churchill clutching a cigar as he was carried to an ambulance after a 1962 hospital stay.

O’Neill later said that when photographing the Beatles he placed John Lennon in the foreground because he thought that “it was obvious John was the one with the personality.”

He photographed many other big names over the course of a career that spanned decades, including model Kate Moss, Queen Elizabeth II, singers David Bowie and Amy Winehouse and former first lady Laura Bush.

O’Neill’s photos of Elton John remain among his most recognizable. One shows the singer, exuberant and sparkling in a sequined baseball uniform, with an audience of thousands in the background.

“He was brilliant, funny and I absolutely loved his company,” John tweeted Sunday.

Another iconic O’Neill photo, this one from 1977, depicted actress Faye Dunaway lounging poolside the morning after winning a best actress Oscar for her performance in “Network” (1976), the statuette sitting on a table and newspapers strewn on the ground.

O’Neill was married to Dunaway for three years in the 1980s. According to British newspaper The Guardian, the couple had a son. O’Neill later married Laraine Ashton, a modelling industry executive.

In an interview with The Guardian last year, O’Neill discussed how he viewed his past photos.

“The perfectionist in me always left me thinking I could have taken a better shot. But now when I look at photos of all the icons I’ve shot - like Mandela, Sir Winston Churchill and Sinatra - the memories come flooding back and I think, ‘Yeah, I did all right.’”