A total of 18 players found new clubs through the KBO’s second round draft on Wednesday. 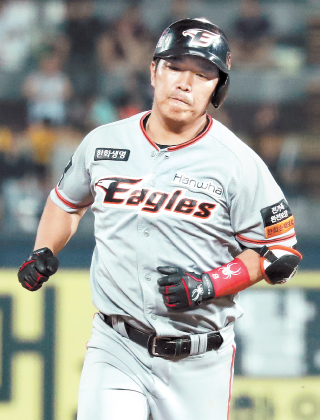 The second round draft was created based on the major league’s Rule 5 draft. In December every year in the major league, the Rule 5 draft allows teams to draft young players who are only getting the opportunity to play in the minors. The KBO established the second round draft with the same idea - giving players stuck in the Futures League a shot at joining the KBO. The system was established in November 2011, and this year marks the fifth edition.

This year, Hanwha Eagles’ infielder Jeong Keun-woo’s transfer came as the biggest surprise. After graduating from Korea University, Jeong made his KBO debut with the SK Wyverns in 2005. Once he became a free agent in 2013, Jeong signed with the Eagles.

After the 2018 season, Jeong re-signed a two-year contract, with an option of another year, with the Eagles. But this season, he didn’t meet up to expectation as he finished with a 0.278 batting average, three home runs and 30 RBIs in 88 games. As the Eagles are getting younger, Jeong ended up playing as a utility player this season, appearing both as a first baseman and outfielder.

Due to this, Jeong wasn’t included in the 40-man roster and was therefore eligible for the second round draft. Despite his recent performance, the Eagles’ decision not to include Jeong in the roster was a surprise as he is a veteran who has experience playing for the national team and in postseason games.

Although he wasn’t able to play much as second baseman over the past two seasons, Jeong will now head to the LG Twins where he is likely to be a serious contender for the spot alongside Jung Ju-hyeon.

Along with Jeong, the Twins drafted pitchers Baek Chung-hoon from SK and Kim Dae-yu the KT Wiz.

Lotte Giants’ first baseman Chae Tae-in will move to the Wyverns. Chae made his KBO debut with the Samsung Lions in 2007 and was traded to the Nexen Heroes, now the Kiwoom Heroes, in 2016. Once he became a free agent in 2017, Chae joined the Lotte Giants through a sign-and-trade. His stay with the Giants only lasted two seasons.

Along with Chae, the Wyverns drafted pitchers Kim Se-hyun from the Kia Tigers and Jung Soo-min from the NC Dinos.

The picks at the second round draft are made in the reverse order of the KBO’s 2019 regular season standing. Due to this, the Giants got first choice.

Despite expectations, the Giants didn’t rush to pick up a catcher. The Busan team has struggled behind the plate for the last few seasons and hasn’t pursued a free agent catcher, so it was widely assumed the team was saving the spot for a second round draft pick. Instead, the Giants selected the Wyverns’ outfielder Choi Min-jae.

Since the Giants currently have outfielder Jeon Jun-woo as a free agent - and most free agents return to their original teams - the club’s decision came as a surprise. The Giants didn’t draft any players in the second or the third round. Since the club announced that they will not be signing free agent catcher Kim Tae-gun, it is likely they will sign a foreign catcher.

The Tigers were the only other team to draft one player, pitcher Byun Jin-soo from the Doosan Bears.

The Eagles, Dinos, Twins and Wyverns used all their three picks. The Eagles took catcher Lee Hae-chang from the Wiz and outfielder Jung Jin-ho and pitcher Lee Hyun-ho, both from the Bears. For the Eagles, who struggled on defense this season, the addition of Jung could be a significant help.

The Dinos announced picked pitchers Kang Dong-yeon from Doosan and Hong Sung-min from Lotte, as well as outfielder Kim Ki-hwan from Samsung.

The Bears and the Heroes, who finished first and second in the Korean Series this year, did not draft any players. However, as the other clubs picked up four Bears players, the club took home 800 million won in compensation.