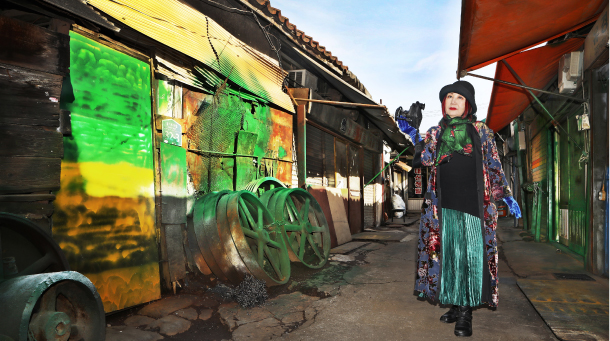 Ahn walks around the alleys near Cheonggyecheon, home to many small hardware stores. She has been taking photos in the neighborhood for many years. [PARK SANG-MOON]

There is a photographer always in search of colors amid the tall gray buildings that stand like trees in urban centers. By capturing the colorful characteristics of a metropolis, she hopes to upend the perceptions people have that the cities are just big jumbles of concrete slabs.

J. Ahn loves the culture and art that make up a city. With her camera, she photographs the vivid and beautiful moments that take place downtown.

Born in Seoul, Ahn has lived in cities her entire life. She spent her 30s and 40s in New York and has also lived in other cities, like Paris and Havana.

Her experience in various cities has been captured in a series of photographs titled “City Colors.”

For the “City Colors” project, the photographer comes up with an image she wants to capture in her mind and then waits until she gets what she wants.

Her dramatic creations are the products of waiting long periods of time in back alleys or in the middle of big cities. 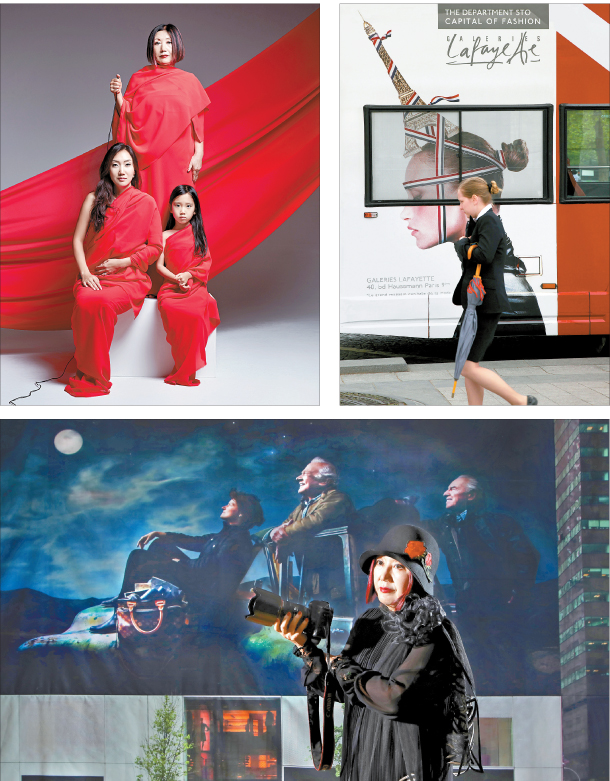 “3 Generations,” top left. J. Ahn’s photo of a woman walking past a bus in Paris, France, top right. Ahn stands in front of a photograph that was taken in 2009 on Fifth Avenue in New York City. [PARK SANG-MOON, J. AHN]

When Ahn visited Paris in 2009, she rented a studio and secluded herself from the outside world. Then, she would take photos for 12 hours a day. Of all the photos she took while she was there, she says the most memorable one is a picture of a woman walking past a bus.

Ahn was impressed by a bus banner that had a picture of a woman with the Eiffel Tower tied to her head. So, she waited for a pedestrian who looked similar to the woman in the banner to pass by.

After hours of waiting, the photographer spotted a woman who was sporting the same hairdo as the woman in the advertisement. Ahn pressed the shutter with joy.

Before Ahn left for New York in 1981, she worked as a news presenter at the now-defunct Tongyang Broadcasting Company, also known as TBC, but she quit her job after the company was taken over by the Korea Broadcasting System under the military regime of the former president Chun Doo Hwan.

Her husband, who worked as a producer at TBC, accompanied her.

After settling down in New York, Ahn briefly worked as a news presenter, but she soon began to pursue a career as a photographer while raising her children.

Ahn says that her photography is hugely inspired by her father and New York, which she considers her second home.

Ahn’s father adored his daughter so much so that he used to tell her “Women deserved to be respected.”

Her father tried his best to let her experience many different things in life, such as music, dance, art, theater, movies and fashion.

Thanks to her father, Ahn has watched two to three films a week since she was young. Ahn says films are great sources for her inspiration when working as a photographer.

New York had everything Ahn dreamed for in a city. The city was filled with art galleries, museums, theaters and even a thick forest.

Every morning, she walked down the streets of New York with a camera on her shoulders. She enjoyed every inch of the city, from the New Yorkers she ran across on the streets to the bold street art drawn on the walls that surrounded construction sites.

Ahn thought those were the colors of New York.

She was deeply in love with the city, but she returned to Seoul in 1996 with her husband.

Then she began to focus on taking photos of Cheonggyecheon in black and white for about five years.

Ahn spent most of her time at her darkroom located in the Chungmuro neighborhood in Jung District, central Seoul. When Ahn wasn’t in the darkroom, she roamed around the alleys near Cheonggyecheon that are home to many small hardware stores.

But a trip to Cuba in 2010 totally changed the way she takes photos.

First, Ahn was fascinated by the colors of Cuba - the colors reminded her of Cheonggyecheon, which runs through downtown Seoul.

After returning from the trip, the artist discarded all of her black and white photos of her beloved neighborhood.

After that, she began taking photos of the stream in color and eventually included them in an exhibition entitled “Frozen in Time.”

After a multi-decade career, Ahn is not feeling well. She had multiple surgeries on her knee after years of walking around every day for hours while carrying her cameras.

But she remains active and busy with many projects.

One of the projects is “3 Generations.” For the project, which started in 2014, Ahn takes photos of her daughter, granddaughter and herself in one frame. Ahn added that it is a long-term project that will take, at least, 10 or 20 years.

We are all born with our own blank drawing pads and each one of us fills them differently. Ahn fills her sketch pads with photos of cities. Through her photos, she wants to tell viewers that the city is abundant with happy and beautiful moments. She also shows us that there are plenty of reasons for us to love the places we live in.