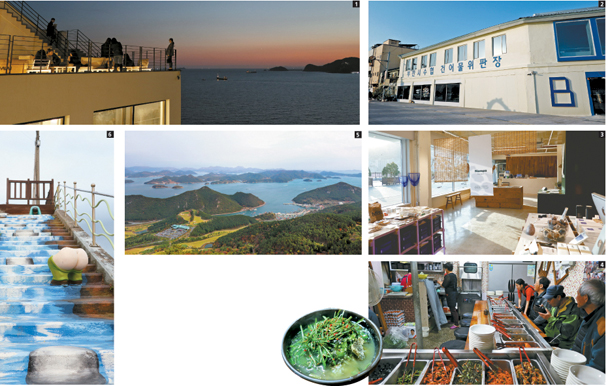 1. People look out from the rooftop of a cafe in Huinnyeoul Culture Village. 2. B4291, a newly-constructed cultural hub in Jagalchi Market, houses a building that once hosted seafood auctions. 3. Inside B4291, a shop sells all kinds of props inspired by the market and the seafood scene in Busan. 4. A restaurant in South Gyeongsang’s Tongyeong that serves sirakguk, a bowl of eel soup, far right. 5. The view from a Tongyeong Cable Car, on which visitors can get a panoramic view of the South Sea. 6. Tongyeong is home to Seoparang, an old village now decorated with colorful statues and murals to attract young visitors. [LEE SUN-MIN]

BUSAN and TONGYEONG, South Gyeongsang - Light refracting off the water is often a refreshing sight for people looking for a break, especially those seeking something different from their urban surroundings of tall buildings and cars. While the water in the southeastern part of the country may resemble the sea anywhere else in the world, the beaches and cliffs that line the coast are like nowhere else.

The Busan/Tongyeong region is one of the ten areas that the Korea Tourism Organization recommends both international and local travelers visit. Specifically, it encourages tourists to travel along the coast to see how different spots have developed over the years.

Busan, best known for the famous Haeundae Beach, has become increasingly diverse over the past few years, with more and more visitors coming in town. One of the port city’s most distinct attractions are its seafood and fish markets, which is why the city has focused on making them into distinct cultural draws.

The newest attempt is B4291, a multicultural space that will be home to a wine bar, a coffee shop, an exhibition gallery and a store selling props inspired by all kinds of seafood. Located in a renovated seafood auction building, visitors will be able to find some food items, like miyeok, a type of seaweed, in a small package, to bring back home as a souvenir. Miyeok from Gijang County, a region in Busan, is particularly popular among Koreans for its taste, as the sea water in the area is where warm and cold tides meet, which results in a deeper flavor. There is even a meal kit box with seaweed, soy sauce and sesame oil, some of the key elements to make the popular miyeokguk, or miyeok soup - a Korean staple that people eat on their birthday.

The seats that look out onto the sea at cafes in Huinnyeoul Culture Village, above, are popular at sunset. Some of the canned goods, far right, and other items inspired by commonly used icebox colors in Korea, right, are available for purchase at B4291 in Busan. [LEE SUN-MIN]

Taken from the patterns and colors of ice boxes often used in Korea to move fresh seafood from one place to another, the shop also sells wireless earphone cases in red, blue and a blue flower pattern often seen on the ice boxes. Reusable bags are designed with images of fish, and cleaning sponges are also shaped like fish.

If you want to try some delicious fish for yourself, simply walk out the back door of the building, which takes you right to alleys filled with dried seafood stores, a perfect snack or souvenir.

Although it is not yet fully prepared, the space also plans to sell wine and dried seafood made in the area nearby. B4291 hopes to make a visit to Jagalchi Market more fun and memorable even after the market is closed at night. For those who do not drink, a coffee shop is also getting ready to open, complete with a view of the sea and fishing boats.

Across the bridge from the Jagalchi Market is Yeongdo Island, where the Huinnyeoul Culture Village is located. The village, formed alongside a cliff along the water, is where people ran to while looking for a safe place during the Korean War (1950-53). Many left due to the inconvenient formation of the village, but in recent years, artists have come to the island in search of affordable studio space, and then a number of stylish cafes followed, most offering stunning views of the sea. Most people take a walk around the village through its maze-like alleys and wrap up the walk with a drink at a cafe in time for the sunset. Since the village faces west, it has become a popular spot to take in the pink sky in the evening. 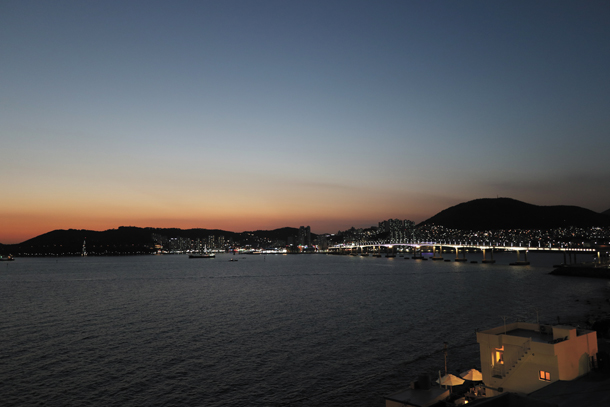 A view of western Busan from the Huinnyeoul Culture Village. [LEE SUN-MIN]

After a day of walking around the alleyways of Huinnyeoul Culture Village in Busan, head west to Tongyeong where the bay is full of hundreds of islands. The best way to see the view is to take a cable car. Offering a completely different vista from anywhere else along the coast, the cable car in Tongyeong is particularly special because it doesn’t just give you a view of the horizon. Along the way, you can also see the collection of islands that make up the Halleohaesang National Park. After taking some time to appreciate the view, you can take a short hike to get a view from a higher point. The trek to the top of Mount Mireak should only take about 15 minutes, and the trail up there is clear, with wooden decks, so there’s no need to pack your hiking shoes. It’s not unusual to see young children with their parents making their way up to the top.

There is a tour at the top of the trail that is able to provide stories about Tongyeong and its history. Introduction sessions are held once an hour from 10 a.m. to 3 p.m. every hour on the dot, but the guide will talk to you whenever you have any questions about the area.

Before heading anywhere else, make sure to stop by Seoho Market not far from Tongyeong Ferry Terminal. Here, you can try out sirakguk, one of Tongyeong’s famous treats. The bowl of soup is made from boiled eel - some restaurants include the entire eel for a deep flavor while others mix the broth with anchovy broth to make the texture less dense. Sirakguk is also mixed with siraegi, dried radish leaves, which is what the soup is named after. Usually, restaurants that serve sirakguk have a long communal section in the middle of their tables with a variety of banchan, often called as side dishes, including kimchi and other marinated vegetables that people pair with their rice to make their dish more flavorful.

After eating, burn off some calories by taking a walk up the hills to get close to the water. Seopirang Village, followed by the success of the local reformation of a neighborhood known as Dongpirang Village, has become one of Tongyeong’s hot spots in recent years, as the old town formed on the hillside has been newly decorated with colorful patterns and illustrations. While walking up the painted stairs, it is hard to resist making several stops to take photos. At the very top, catch your breath and take in the incredible view of the sea and some fishing boats floating by.