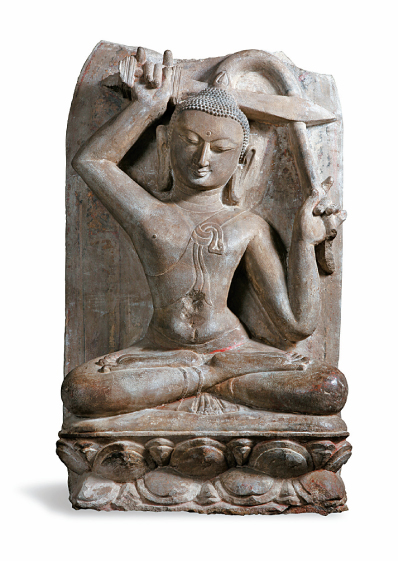 A statue of Buddha, circa 11th and 12th century A.D. [Bagan Archaeological Museum]

Over 110 Buddhist artefacts and statues have made their way from Myanmar to the Busan Museum in time for the Korea-Asean summit.

Visitors are introduced to early artefacts of the Pyu period (2nd century B.C. to 9th century A.D.) and guided through to more recent works produced during Myanmar’s last monarchy, the Konbaung dynasty that ended in 1885.

Statues of Buddha created between the 11th and 13th century at the height of the Bagan Dynasty, the first kingdom to unify the area that make up present-day Myanmar, are specially spotlighted in the exhibition.

The Bagan period saw the spread of Theravada Buddhism, the religion of an estimated 90 percent of Myanmar’s total population. The city of Bagan, which served as the ancient kingdom’s capital, still stands and was recently recognized as a Unesco World Heritage site this July for the exceptional presence of Buddhist art and architecture.

These precious artefacts have been brought from four national museums in Myanmar - the Myanmar National Museums in Yangon and Naypyitaw, the Bagan Archaeological Museum and the Sri Ksetra Archaeological Museum. Some of the works on display at the Busan Museum are leaving the Southeast Asian country for the first time ever.

It was thanks to the ongoing cultural interactions between the governments of Korea and Myanmar that an exhibition of this scale could materialize, explained curator We Soon-sun.

“Korea’s Cultural Heritage Administration has been offering assistance in restoring temples in Myanmar,” she explained. “Those efforts proved to be really helpful when we approached [Myanmar museums] with the idea of hosting this exhibition.”

The Busan Museum, which is associated with the Busan Metropolitan City, also took the exhibition as an opportunity to share more about Myanmar, an Asean country that Koreans are not as familiar with.

On display are timelines of important historical events, including the start of kingdoms in present-day Myanmar.

The “Buddhist Art of Myanmar” kicked off with a traditional performance for its opening ceremony, and the museum is set to partner with Sogang University Institute for East Asian Studies to host an academic symposium on Myanmar’s Buddhist art on Dec. 13.

“Buddhist Art of Myanmar” runs through Jan. 12. Hours are from 9 a.m. to 6 p.m. except Mondays, but extend to 9 p.m. on Fridays and Saturdays. Entry is free.