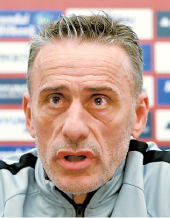 Under FIFA rules, clubs are obligated to release players for national duty if they are called up. As the EAFF is not a FIFA organization, no such obligation exists. Due to this, none of the players playing in Europe or the Middle East are able to join Bento’s roster as they have club commitments.

Also, under the agreement with U-22 national team head coach Kim Hak-bum, Bento didn’t select any players that can compete for the U-22 squad so they can solely focus on the Olympics. During this period, the U-22 football team is scheduled to train for the Asian Football Confederation U-23 Championship, which serves as a regional qualifier for the 2020 Tokyo Olympics.

Ulsan and Jeonbuk are currently vying for the K League 1 title, with Ulsan the current leader.

Both Kim and Moon have been their respective teams’ star players and are both nominated for the MVP award this season. This season, Kim appeared in 34 matches with Ulsan and scored 13 goals and eight assists.

Moon played in 31 matches for Jeonbuk and scored 10 goals, adding 10 assists. Moon is currently ranked first in the K League 1 for assists.

Lee Young-jae of Gangwon FC was added to the national team for the first time in his career.

Korea will compete at this year’s tournament as defending champion. In 2017, Korea defeated Japan in the final to win the tournament. With a win, Korea has won the most number of titles, at four.

Not only as the defending champion, but Korea will also be the host of this year’s event. The final round of the eighth edition of the EAFF E-1 Championship will be held in Busan from Dec. 10 to 18.

The players will start training in Ulsan on Dec. 5 and will be heading to Busan on Dec. 9, two days before Korea’s opening match.

The tournament will be played in a round-robin format, with teams receiving three points for a win and a point for a draw. The team with the most points after the three matches will be declared the champion.

Korea, China and Japan automatically qualify for the finals, with the two preliminary rounds deciding the final team that competes. This year, Hong Kong earned that spot.

The women’s EAFF E-1 Football Championship will also be held in Busan, but all the matches will be played at Busan Gudeok Stadium.