Inspirational songs for the independent explorer: Leave behind the Tracy Chapman and try this themed travel playlist

Inspirational songs for the independent explorer: Leave behind the Tracy Chapman and try this themed travel playlist

Jeongdong-gil, which runs along the side of Deoksu Palace, is a popular spot for Seoulites and visitors looking for a peaceful walk to escape the hustle and bustle of the busy city. [KIM SANG-SEON]

Travel with family and friends probably doesn’t require a playlist - one would hope that polite conversation could fill the silence - but hitting the road alone often needs a little musical accompaniment.

To help travelers pick the best tunes, the Korea Tourism Organization has compiled a list of top locations and tracks to go with them, hoping to help explorers forget the cold weather for at least a few minutes as they live vicariously through the music.

Probably the easiest spot to get to within central Seoul is Jung District, home to all sorts of tourist attractions.

Jeongdong-gil, an alley that winds its way alongside the walls of Deoksu Palace, was the inspiration for late composer Lee Young-hoon. His song “Gwanghwamun Love Story,” released in 1988, features the walls of Deoksu Palace and the church he saw as he walked the alley all those years ago. The song has a mellow melody and serves as the inspiration for a musical of the same name in 2011. The song was sung by popular singer Lee Moon-sae. 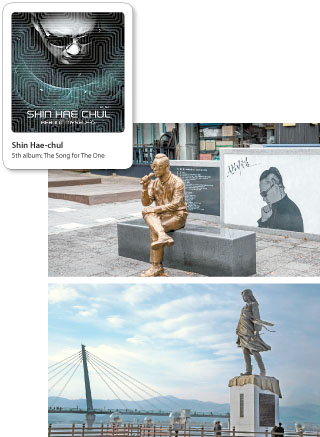 Top: A statue of singer Shin Hae-chul in Seongnam, Gyeonggi, where fans come to remember the late singer. Above: A statue of the Soyang River Lady by Soyang River Dam and reservoir, which inspired popular trot song “Soyanggang Cheonyeo.” [KOREA TOURISM ORGANIZATION]

The area around late singer Shin Hae-chul’s studio in Seongnam’s Bundang District is actually home to a Shin Hae-chul street. The city and the singer’s fans got together to create an area where people can visit and remember the popular singer.

There is a statue of Shin holding a microphone on the 160-meter (525-foot) street. The street is covered in messages written by singers and celebrities interspersed with Shin’s lyrics. Shin died after a series of surgeries due to discomfort in his stomach.

One popular song that inspires a walk down memory lane - at least for people with memories related to Chuncheon - is “A Train to Chuncheon,” originally released by Kim Hyun-chul in 1989.

The song, with lyrics that tell the tale of a person traveling to Chuncheon without any particular plan, is a popular one among people looking for a short getaway within striking distance of Seoul. Kim’s song is so ubiquitous that virtually every time somebody on TV takes a short break, they stare wistfully out the window at the Bukhan River while the song plays in the background.

Taeyeon of Girls’ Generation also sung a recent remake of the song, ensuring it is widely familiar with younger listeners.

If that is starting to sound a little too mainstream pop for your tastes, why not try a change of pace with one of Korea’s most widely popular trot songs, “Soyangang Cheonyeo,” often translated to Lady of Soyang River.

The song is still remembered today thanks to the statue of the lady seen right by Soyang River Dam and reservoir. The song is even older than Kim’s “A Train to Chuncheon,” but as it is often referenced in songs and entertainment shows, it remains well known today.

Why not listen to both songs while taking the train to Chuncheon Station, where you can pick up the city tour bus.

Despite being something of a thoroughfare in days of yore, Bakdaljae was virtually unknown in modern times until the release of “Crossing the Teary Hill of Bakdaljae” in 1948.

The hit song, which went on to inspire many different plays, theater pieces and movies, tells the tale of Geumbong, a girl who lived in the town below Bakdaljae during the Joseon Dynasty (1392-1910), and scholar Bakdal. The name Bakdaljae comes from this old love story, which involves the scholar leaving town to take a test in what is now Seoul, and how he cries as he walks over the hill, leaving his loved one behind.

Jecheon is also popular for its herbs. Recently, it has been gathering experts to the area to study herbal medicine, and had held an expo to share ideas as well. Those who want to get an aerial view of this area of spectacular national beauty can ride the cable car over Cheongpung reservoir.

Trot may be making a resurgence today, but what many new enthusiasts might not realize is that the genre is the original emergence of the musical style that is widely credited to singer Lee Nan-yeong and her hit 1935 song “Mokpo’s Tear.” Why not take a trip down to the town that the famous song describes?

The song tells a teary tale of sadness, nostalgia and broken hearts centered around Mokpo’s harbor, a place where people often part ways. Get on a cable car that gives you a view of the harbor city as you listen to the song and feel the pain that echoes down the years.

To delve deeper into trot music, go to the Korea Trot Music Center in nearby Yeongam, which opened last month. There you can see the history of how the genre was formed and further developed over time and what other pop cultural items have been created thanks to the rise of trot.

Many people assume Sampo is an idealized fictional paradise, but it is in fact a very real village in Changwon. Songwriter Lee Hye-min visited the area and found the town so charming that he wrote the lyrics.

Back in 2008, the neighborhood erected a statue in Lee’s honor, with his lyrics on one side and extracts from an essay he wrote on the other. The statue also works as a music box, so when visitors push a button, the song plays.

There are some cafes around the town that are well worth a visit for a relaxing cup of coffee in this sleepy corner of the country.

Nearby Changwon Marine Park, adjacent to Sampo village, is a popular attraction. There are other arboretums and small towns that show off a trendy mix of old and new.