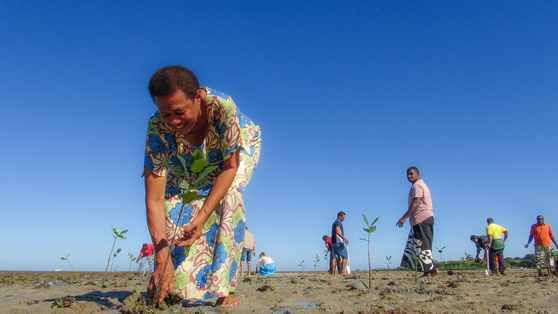 The Korea Forest Service (KFS) is a leader when it comes to contributing to global forest goals and targets.

Global efforts, such as the Bonn Challenge, which aims to restore the world’s degraded and devastated land, the UN Climate Summit, which launched in 2014, and the New York Declaration on Forests, which aims to restore another 200 million hectares (494 million acres) of forests by 2030, are just some examples of the efforts that have been the motivation for the KFS to organize a team for forest and landscape restoration.

In 2014, such efforts led the KFS and the Food and Agriculture Organization of the United Nations (FAO) to organize the team called the Forest and Landscape Restoration Mechanism (FLRM).

The KFS shares some of Korea’s successful experiences in forest rehabilitation to developing countries through FLRM, dispatching high-level officials as technology policy consultants, and has established a basic management mechanism structure for forest and landscape restoration.

Since 2015, the KFS made great efforts to implement pilot projects in eight developing countries and to secure funding from other countries and organizations for the expansion of the projects.

As of 2019, the FLRM has succeeded in attracting additional funding from the Global Environment Facility, Germany and France and increased the number of target countries to 20.

The FLRM is recognized as the biggest and the most active organization in the forest and landscape restoration field, with Korea being the starter and leader of the FLRM.

The Conference of the Parties to the Convention on Biological Diversity (CBD) is another organization that works along with the KFS to restore biodiversity.

The CBD secretariat has requested the KFS share its successful experiences of forest restoration in Korea to the other members of the organization, and in 2014, the two agencies launched the Forest Ecosystem Restoration Initiative at the CBD COP12 held in Pyeongchang, Gangwon.

The international community has made emphasis on existing global targets, including the Sustainable Development Goals, the Bonn Challenge and the Aichi Targets. In line with these targets, the United Nations Decade on Biological Diversity (2021-2030) was announced at the UN General Assembly in March, and the UN Framework Convention on Climate Change and CBD will request their member states to make innovative efforts under two new global systems, the Paris Agreement and the Post-2020 Global Biodiversity Framework.

The World Forestry Congress, the world’s biggest forestry conference, will be held in 2021, with the KFS and FAO being the co-hosts.

With representatives from over 160 member states set to attend, the KFS expects the event to be a great opportunity to showcase its international cooperation business to the entire community.