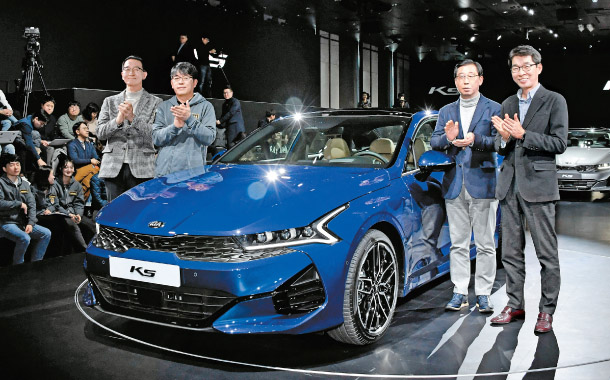 Kia Motors launched the new K5 sedan as it seeks to reinvigorate the popularity of sedans in Korea’s SUV-focused market.

The second-largest automaker by sales in Korea announced during the launch event Thursday that the third-generation K5, known as the Optima in the United States, comes with an enhanced design and a number of technological features targeting younger customers.

“After seeing an explosive response from customers and media after we started taking pre-orders, I already could tell that this car is the one,” said Park Han-woo, president and CEO of Kia Motors, during the media event held in Gwangjin District, eastern Seoul.

Between Nov. 21 and Wednesday, Kia Motors said it received more than 16,000 pre-orders for the new K5 sedan, the highest pre-sale record in the automaker’s history. The sister company of Hyundai Motor is looking to sell 70,000 K5s next year by targeting consumers in their 20s and 30s looking for modern, futuristic options.

While the K5 sedan has traditionally been one of the most popular options for taxis in Korea, Kia Motors said the third-generation model will not be offered for taxis.

The new K5, which is expected to compete against Hyundai Motor’s Sonata sedan that launched earlier this year, has sportier look than its predecessor introduced in 2015 thanks to its “Tiger Nose” radiator grille, seamlessly connected with sharp, horizontal headlamps.

It contains a 12.3-inch cluster and a 10.25-inch display infotainment system that comes with a voice recognition command system supplied by Kakao. The system allows drivers to control temperature and search for information in real time.

The new K5 is also equipped with a smart air purifying system that automatically purifies air as needed. Drivers who download a corresponding smartphone application will be able to get directions to their final destinations even after exiting the car.

Kia Motors added that the new K5 is also equipped with car-to-home technology, which allows users to control smart lights, temperature and more in their homes. The model can also park itself and be moved forward and backward using the smart keys.

All trims for the new sedan will be equipped with collision avoidance systems for the front, rear and blind spots, on top of lane-keeping assist and adaptive cruise control.