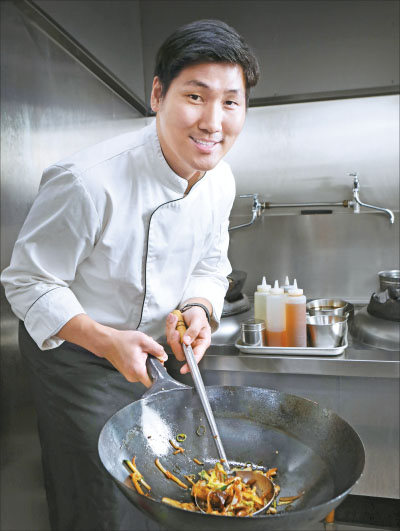 As the trend of buying so-called meal kits to cook at home continues to grow, one restaurant is bringing its jjajangmyeon, Korean-style Chinese noodles in black sauce, to shelves is Masi China in Mapo District, western Seoul.

The six-year-old restaurant has teamed with local retailer Emart to mass-produce meal kits for those who want to make tasty jjajangmyeon at home. The product was released in July, and now Emart wants to bring the item to the United States in the form of instant noodles.

“To many Koreans, Chinese food isn’t something that is not part of Korean food culture,” said Cho Seung-hee, the owner chef of the restaurant.

Unlike many other chefs cooking Chinese food who have family from China, Cho needed to find a specialty to get the spotlight. The young chef isn’t afraid of using social media to gather information and promote his food and share where he eats. He also prioritizes service as much as food to attract young customers. 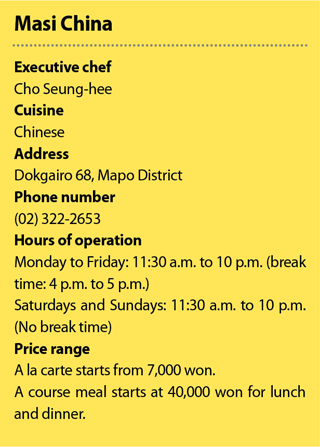 It was an accidental move for Cho to build his career cooking Chinese food. His professor at school suggested that he apply for a position at The Shilla Seoul’s Chinese restaurant even though he was more focused on Western-style food at the time. The idea was to start in one of the prestigious hotels in Korea and then find a way to transfer.

But the world of Chinese food turned out to be eye-opening.

“The spectrum of Chinese food available in Korea was very narrow back then, since all I knew about was just jjajangmyeon, jjamppong, fried rice and tangsuyuk,” said Cho. (Jjamppong is a spicy noodle soup and tangsuyuk is fried pork with sweet and sour sauce.)

“Then I got to see a whole range of dishes using sea cucumber, bird’s nest and many more rare items used in the kitchen, and I was set on continuing to work with Chinese cuisine within my first week at work.”

Some of Masi China’s most popular dishes. [PARK SANG-MOON]

As he was delving deeper into the world of fine Chinese food, he started to think he could make his own business with the techniques he learned at the hotel. Deviating from his dream of spending 20 years at the hotel and then starting his own restaurant, he decided to make an early move after working for four years to let people know that there is an extensive world of Chinese food that one can’t find from the menu of their favorite Chinese food delivery restaurant around the corner.

“I wanted to make the food as fresh as possible using more everyday ingredients than luxurious ones in a way to make better Chinese food part of people’s everyday diet.”

Although more time- and labor- consuming, Cho doesn’t start cooking until an order is made. He tries to bring out more flavors by using additional oyster sauce or chicken stock rather than using commercially made additives that are commonly used at restaurants.

“I wanted people to know that Korean Chinese food can be something fancy while also being casual,” said the chef, explaining that many have been exposed to Chinese banquet food culture, where people sit around a large round table that has all kinds of delicious dishes presented at once so that they can pick and choose whatever items they want.

“Chinese food can be served in the form of French-style fine dining and now some of my customers are getting used to experiencing Chinese food in that form as well.”

To find inspiration, he makes the most out of social media. As a chef and restauranteur who runs two restaurants at the moment - with one more opening in January - he doesn’t have much time to travel to research recipes. Instead, he checks out photos and the descriptions of food served at fine Chinese restaurants across China and then tries making them on his own.

When he eventually gets a chance to visit the restaurants, he brings a notebook along with him to see if what he imagined from the photo is similar or different to what it actually tastes like. Going to sushi places is another thing he does to expose himself to the diverse seafood options that he may not get to experience at Chinese restaurants.

“For me, trying food at many different restaurants isn’t just a stress reliever I do in my free time, it is also an inspirational tool to see what ideas I can get out of different cuisines so that I can apply that to cooking Chinese food,” said Cho.

Currently, he has one restaurant on a street side and one restaurant located inside a mall. He personally plans to have a total of five restaurants inside of malls and three free-standing locations. Beside the location in Mapo District, he is considering entering more established commercial areas like restaurant-heavy Gangnam District and the office-heavy Gwanghwamun area so that he can try presenting his version of Chinese food in different forms that fit to demands of business customers.

“I have customers who used to be college students when I opened my first restaurant come back as office workers to have dinner and drinks with their colleagues,” said Cho.

“I hope to build a restaurant where customers who visited 10 years ago come back and say that the food tastes just like how they remember it.”