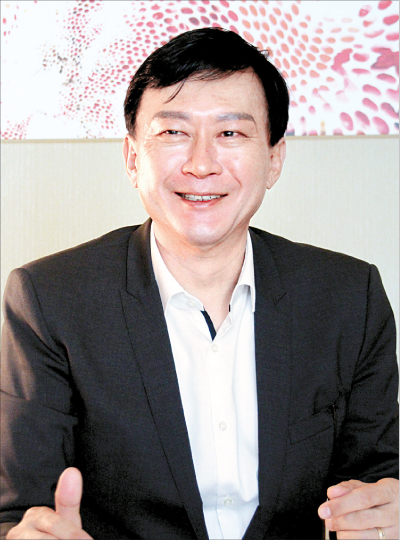 SAN FRANCISCO - As Samsung BioLogics prepares to make its first overseas expansion in April, the young company is betting on key professionals and veterans from major industry players to help stake its claim in the global biopharmaceutical sector.

Founded less than 8 years ago and listed on the main bourse Kospi in 2016, Samsung BioLogics is a relative latecomer to the competition. For now, it largely lacks the institutional experience and know-how typical of industry giants like Merck & Co. and Roche Pharmaceuticals.

With the opening of its first overseas contract development organization laboratory near San Francisco, the company is betting on experienced biopharmaceutical industry experts like Executive Vice President John Rim to help it make connections and drive the business forward.

Rim, the head of Samsung BioLogics’ contract manufacturing organization business, joined the company in 2018. He says his new company has the potential to stand out in the global market while helping other Korean players to do the same if it keeps its focus on fostering talent, with help from the greater Samsung Group.

He noted that although “Korean culture seems to care more about the age and when you entered the organization,” his company takes a more meritocratic approach, similar to its European and American competition.

Rim is expected to help Samsung BioLogics win new contracts with global companies based on his around 30 years of experience at Booz Allen Hamilton, Yamanouchi Pharmaceutical, Genentech and Roche.

Below are edited excerpts of Rim’s interview with The Korea JoongAng Daily and The Korea Herald last month, on the sidelines of the 38th J.P. Morgan Healthcare Conference in San Francisco.

Q. You spent decades working in foreign companies, many of them being globally competitive ones. How does that experience help you?

A. When I first came to Samsung BioLogics in 2018, the company set up several meetings, with some of them happening to be my former colleagues. Having worked multiple years at Genentech, most of the companies I end up working with are former Roche and Genentech people that I had worked with in the past. With Big Pharma like AstraZeneca, I used to work with the CEO and the same for Gilead Sciences. This biopharmaceutical sector tends to be a small industry. If you are in pharma, either you are working for start-ups for a variety of different folks that helps [in] opening doors and opening accounts, or you are working with the ones you have worked with before.

Samsung BioLogics is setting up a new office in the Bay Area. What is your involvement here?

I will be closely involved just because the company will need to work with a lot of the folks in the biopharmaceutical industry that I know pretty well. I already made quite a few introductions. In this area, there are companies like Genentech, Merck, AstraZeneca and Johnson & Johnson. Lots of small companies that are publicly owned are also there.

What does Samsung BioLogics need in addition to foreign expansion to grow further?

For us, I mean, we have a short and long history. We’ve been only in [the] business since 2011. We are a big start-up, but we are a start-up. There are always areas for improvement. We need to help our people grow. We would love to have them mature more and gain more additional leadership roles in the company. I would love to see our Korean employees take broader leadership roles. It’s ultimately people that make the business. It’s really the people component that is important. Have a culture of innovation and take on leadership roles.

You mention the need for cultural change. What do you mean by that?

We have been investing in people - we brought a lot of college graduates from the sciences and engineering to Samsung BioLogics and have been training and educating them to take broader roles. I know the Korean culture seems to care more about the age and when you entered the organization. But within BioLogics, it’s more focused around ability and what you can do for the business. U.S. and European companies run with more meritocracy, and that’s what we can apply in Samsung BioLogics as well.

What is the impact of ongoing trials for Samsung BioLogics’ accounting scandal on the company’s processes and people?

It really hasn’t influenced my job that much, but it definitely affected key managers like our CEO and CFO. It certainly distracts management’s attention. It also impacts our cost structure. But in terms of the day-to-day, we are focused on our people. While that noise is out there, we try to focus on what we do. Last year around May through July, [all the] news was about Samsung BioLogics. You just hear a lot about it. Sometimes it gets sensationalized, but the process actually consolidated us [as a workforce].

What helps Samsung BioLogics stand out in the market? Why do you think the company could be better than many others?

We try to put in the best technology that is evolving, like N-1 Perfusion and Beacon platform technology. Most pharmaceutical companies have to outsource to design the facility, but we can design the facility ourselves with other Samsung Group affiliates. And with their knowledge and expertise, we build facilities faster than competitors. Other competitors can’t really do that because they don’t have that capacity. As for one of our key competitors, they’ve been just replicating the same technology for 20 years.

The Korean biopharmaceutical industry has suffered some setbacks in recent days. How do you see this as a foreign companies-experienced professional?

If I look at it objectively, I think the Korean biopharmaceutical industry thinks of globalization very simplistically. We have lots of bright Koreans, but it’s not that easy to develop products and molecules. It’s going take time, and it’s going to take lots and lots of money. Korea has been lucky with some technology transfers. Hanmi Pharmaceutical was pretty successful, so everybody jumped on the bandwagon. If I look at Roche, it takes $10 billion to get a drug approved, and that could sometimes fail as well.

What about Phase 3 failures? There have been some cases like that highlighted last year.

When I hear some companies say they can do this and that, I’m like, “great,” but there are going to be some challenges. Phase 3 means just Phase 3. It does not equal to 100 percent success. The Korean market is not mature yet - biotech in Korea is still in its early stage. Phase 3 failure is normal. But people in Korea go crazy over that. [When] I was at Roche, I used to write off $1 billion for a project, which would later come out as a failure. People bet on those things, and they don’t want to write off a failure. But that happens. Koreans should know that.