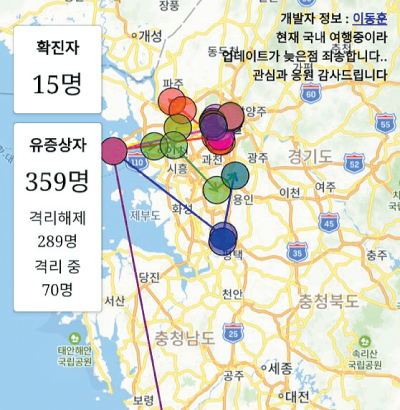 As a new deadly virus continues to spread throughout the world, a pair of Korean university students are using their coding skills to keep the public updated by mapping the disease’s distribution.

While the vast majority of cases have occurred in China, Korean officials had confirmed 15 cases as of Monday afternoon, including five people who contracted the virus from other patients in Korea.

Lee Dong-hoon, a 27-year-old student of Kyung Hee University, released Corona Map last Thursday. It marks the exact locations where the confirmed patients have been and provides the aggregate number of both confirmed patients and those carrying similar symptoms of the coronavirus.

With mounting concerns from the public, the app attracted more than 2.4 million users in less than 24 hours. It was the most-searched keyword on web portals Naver and Daum over the weekend, after three new cases of the virus were confirmed Sunday.

Corona Map’s server crashed Saturday, after the JoongAng Ilbo published an interview with Lee. With the number of daily visitors approaching one million, he upgraded the server of his website the following day.

There were also requests from international users for an English-language version of the website.

Lee says there are multiple steps before data is updated on the map. His main sources of information are official announcements from the Korea Centers for Disease Control and Prevention and emails from private citizens containing information on patients’ possible locations. He has received more than 100 emails after the map’s initial release.

Lee cross-checks information received through email with media reports and analyzes them through software before updating information online.

“The media sometimes reports unconfirmed facts, so I try to be as conservative as possible,” Lee said.

Still, the map’s explosive popularity has Lee questioning its viability.

“I’m not sure how much it will cost me later to sustain this many visitors. For the time being, I plan to pay the maintenance fee on my own, since it was created for public purposes, but if the amount gets out of hand, I will consider putting up advertisements on the website,” he said.

Another map, Corona-nearby, was developed by four students at Korea University.

The map marks locations visited by infected patients and nearby hospitals, with users able to pull up additional information by clicking the icons. The map is available on desktop computers and mobile devices.

“We wanted to use our knowledge to create something meaningful. I hope people use our map to treat coronavirus symptoms faster and eventually help prevent its spread,” said 23-year-old Choi Ju-won, the map’s developer, in an interview with the Hankyoreh newspaper.