It’s as if the chapaguri noodles won the Oscar

It’s as if the chapaguri noodles won the Oscar 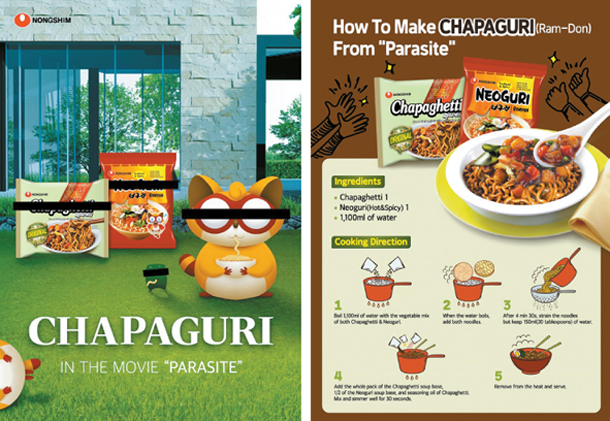 From right: Nongshim’s “Parasite” poster spoof promoted in Britain; The chapaguri recipe on the back of the poster. [NONGSHIM]

The “Parasite” effect is working its way into the noodle market, attracting the interest of major companies, a U.S. ambassador and a large number of highly motivated consumers with a lot of time on their hands.

In a key scene in the award-winning movie, the mother of the rich family asks her maid to make chapaguri, a dish involving the mixing of two Nongshim products: Chapagetti black bean noodles and Neoguri spicy noodles.

But the character demands that sirloin steak be added to the otherwise working-class dish, the appropriation and upgrading of the simple fare highlighting class differences.

Whatever the symbolism may be, the market is co-opting the scene for its purposes, with enthusiasts reverse engineering their own versions and showing off their creations online.

Each version has its signature trick, whether it be a certain measure of soup powder or extra ingredients that might be added.

Nongshim chimed in on Monday, releasing its “official” version on YouTube. The video was released in 11 languages.

According to the manufacturer, allow some of the water to remain after the noodles are boiled. The Chapagetti packets are then added, along with a half measure of Neoguri soup powder. Simmer everything for 30 seconds once the soup and noodles are mixed.

The origins of the dish are murky: As with the invention of fire, no one really knows who first thought to combine Chapagetti and Neoguri. Legend has it that young conscripts experimented with their own noodle fusions on bases throughout Korea, and the recipe circulated by word of mouth. The dish could also just be an internet-driven food hack.

Chapagetti, an instant version of jjajangmyeon, and Neoguri, a spicy, seafood-flavored soup, are legends in their own right, the former around since 1984 and the latter since 1982.

Harry Harris, U.S ambassador to Korea, had an Academy Awards party at the U.S. Embassy featuring chapaguri. His tweet congratulating “Parasite” included an image of him enjoying the dish.

CJ ENM, the film’s distributor, added chapaguri with sirloin to its corporate lunch menu that day.

Nongshim has been handing out Chapagetti and Neoguri packets as promotional items at movie theaters. In Britain, where “Parasite” was released on Feb. 7, the company engaged in some creative guerilla marketing: a mock “Parasite” promotional poster with Neoguri’s signature raccoon character.

Nongshim notes that a chicken and beer - chimaek - craze was fueled in Southeast Asia by a Korean TV drama. The company adds that it is getting a lot of calls from overseas related to the “Parasite” dish and says that it will take full advantage of the marketing opportunity.