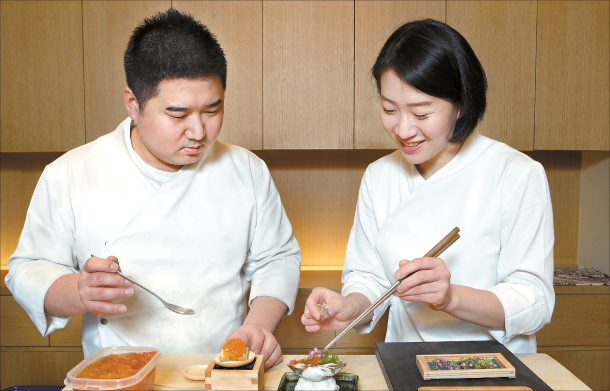 Trust the two chefs at Mitou, and you will encounter a world of Japanese food that is familiar, yet unique, and learn that the cuisine is more than a bowl of rice or noodles topped with luxurious ingredients like sea urchin or abalone. The restaurant in Sinsa-dong, southern Seoul, is different from many popular restaurants because it has two chefs working together and running the space. Chef Kim Bo-mi and chef Kwon Young-woon complement each other to make delicious food and an entertaining environment for guests.

When they opened the restaurant in February 2018, the two chefs wanted to bring something to Korea that hadn’t existed before. Sushi restaurants were abundant, but not many that were small enough for diners to be able to sit by the bar and enjoy a variety of small seasonal dishes. Instead of serving widely-known luxurious items like sea urchin or caviar, they go for other ingredients that are not widely used in Japanese restaurants, such as rice cooked with pork.

They developed the pork and rice cooked in a pot with a type of seaweed called tot that is widely available in Korea or savory monaka in crispy wafers made with Korean-style chicken terrine that hails from North Gyeongsang’s Andong. Although some diners point out that the ingredients they use are too simple, they are firm believers of the harmony between what’s found in Korea and Japan.

“We want something seasonal that [combines] recipes found in both Korea and Japan,” Kwon said. “The culinary cultures have changed over time, and what’s classically Japanese might not work well with diners in Korea. Hence we try to find the points of overlap and make the most out of it.”

The chefs also use ingredients that are unfamiliar to Korean diners and put them into dishes that Koreans easily recognize. They took broth from a soft-shell turtle to make a steamed egg dish during their first year and then started to serve turtle eggs marinated in soy sauce on top of other dishes. Their guests welcome the new tastes and are even okay with seeing the bones of the turtle.

The chefs sometimes display a map of the two countries to show where the ingredients and the recipes come from so that diners can understand the dish they are served in a greater cultural and geographical context.

The two chefs make food based on scientific analysis and the “feeling” that they get while cooking. Kwon picks the general combination of ingredients and then Kim steps in to find a balance between each ingredient, relying on her taste buds, a skill she picked up in Japan. 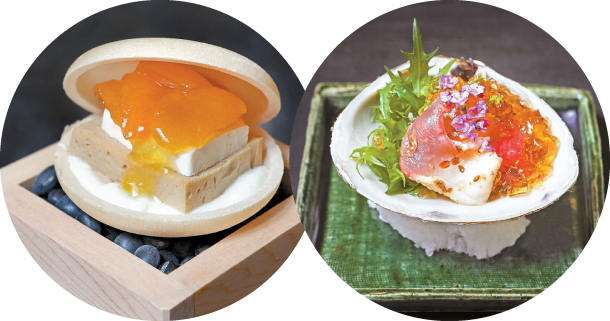 Some of the dishes available at the restaurant at the moment. [PARK SANG-MOON]

“I was never taught with recipes but had to watch other chefs working and learn what they do,” Kim recalls. “The quality or condition of ingredients for basic broth may be different from one day to another, and after years of doing the same thing over and over again, I now understand why certain things are inexplicable and only come from experience.”

The two first contacted each other while they were both working in Japan. Kwon was amazed at the things he encountered while working and eating at over 100 restaurants in a year and started to write about his food journey on his blog. Kim was one of many people who contacted him while he was working on the blog. They met in person after they both came back to Korea and exercised all the skills they had picked up in Japan.

“We just spent hours talking about what we wanted to do in the future and things we started to see more of,” said Kim, adding that they still sometimes go to cafes to talk to each other about what they want to try next.

They always plan ahead. To prepare for next winter, they plan on doing research on blowfish. In the next couple of months, they are planning to check out restaurants that specialize in serving a variety of dishes made with blowfish in order to develop their own style. They usually go to smaller restaurants where they can sit and talk to the chef to get some tips.

“Once I pick which restaurants to visit a few months ahead of time, I keep on thinking about what questions to ask the chef and write them all down,” said Kwon.

Mostly what they delve into is how Japanese chefs intertwine their style with something more modern, considering that the boundaries between different culinary worlds are becoming even more blurry.

“Since we use mostly Korean ingredients at our restaurant, we want our food to be localized,” said Kwon. “But what we can’t give up is having a sturdy base of classic Japanese cuisine so that even Japanese visitors can say what we do is Japanese but with a Korean [twist].”

Your experience at the restaurant begins with a phone call to make a reservation or inquire about the restaurant. You will feel welcomed from the moment your call is answered and be eager to visit the restaurant right away, just as this reporter did. Kim always takes the call, and she is a firm believer that the dining experience begins from the very first phone call.