[Summer's Choice] A Korean staple with delicious depth : Kimchi jjigae is popular for a quick bite or a moreish meal

[Summer's Choice] A Korean staple with delicious depth : Kimchi jjigae is popular for a quick bite or a moreish meal 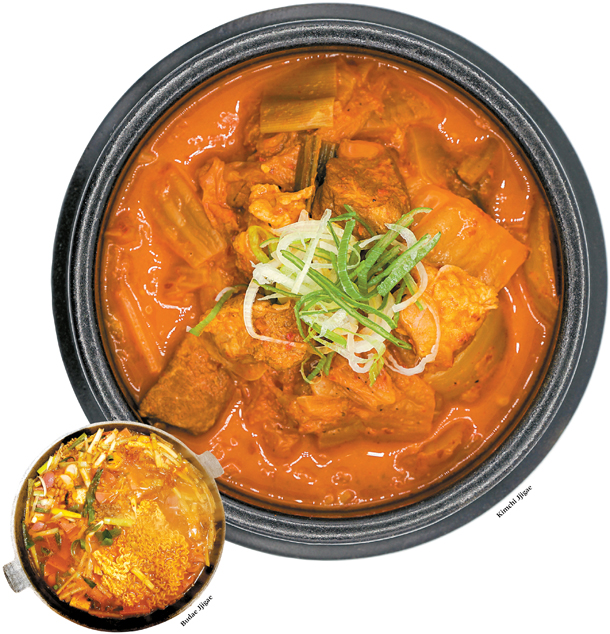 Cast your worries about where to begin your Korean food adventure aside as the Korea JoongAng Daily’s food and travel writer will guide you on what to choose as the essential must-tries of Korean cuisine. The new series “Summer’s Choice,” in time for the 20th anniversary of the paper, will pick a theme every two weeks to help both international visitors to Korea and locals here navigate what to eat and drink to satiate any hunger or thirst. Keep an eye on what’s explained here and the restaurants that are marked so that you can look for what’s close to where you are staying or visiting during your time in Seoul.

The major items one might have heard of or tried even before reaching Korean soil include: chimaek, a combination of chicken and beer, which has risen in popularity around the globe in the past decade; kimchi jjigae, a delicious stew of boiled kimchi and one of the very basic foods Korean people eat at home almost everyday alongside rice and other banchan (assorted small dishes ranging from seasoned vegetables and meat to seafood); the popular naengmyeon, or cold noodles in a broth or spicy marinade, which gained international stardom after the inter-Korean summits in Panmunjom where North Korean leader Kim Jong-un brought a noodle machine from the capital city to serve the Pyongyang-style noodles to those coming from the South. The series will help you have a better understanding of those key dishes and provide a list of 20 options to choose from in Seoul so that you can taste it in person when you are in town.

But the series won’t just focus on Korean food in Korea. It will also offer information about the spots trending in the capital region. Wine fans can find details about a variety of wine bars in Seoul ranging from classic offerings to the trending natural wine, while cocktail lovers can find all the information needed about which bartender at which bar mixes up the best drinks in Seoul. You can learn more about what liquors Korea produces besides the popular green-bottled soju to pair with all types of Korean food while you are here, as many of the finer Korean liquors are not being exported out of the country yet. Avid fans of the Michelin Guide will get a glimpse of the fine dining scene in Seoul as well as insight into whether to invest their money on the developing style of modern Korean or French or contemporary American.

Be ready for “Summer’s Choice” from now on and bookmark all the spots listed here so you won’t waste time on the street looking for a spot to eat. “Summer’s Choice” is a 20-part series so stay tuned to find out what the Korea JoongAng Daily has to offer you and your taste buds throughout its 20th anniversary year! 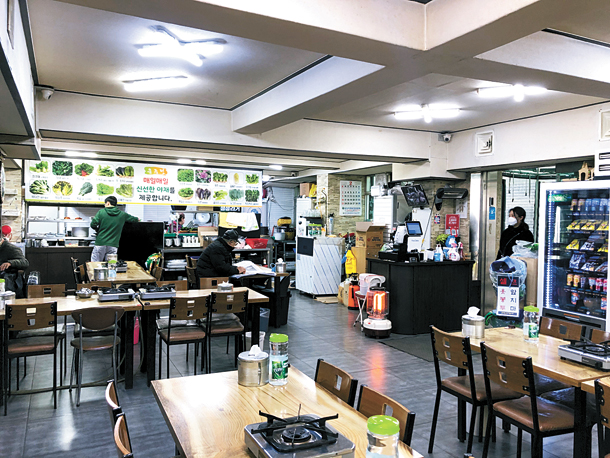 The inside of Eunjujeong in central Seoul, one of the popular and classic kimchi jjigae spots in Seoul. [LEE SUN-MIN]

With more attention being focused on the Korean style of vegetable fermentation, kimchi, once known as something too pungent to eat among Westerners, is back in the spotlight. The fermented food has been enjoying its heyday as one of the key dishes that represent the Korean food culture. It is not so difficult to find a place to eat kimchi because whichever casual Korean place you go, there will be at least some kind of kimchi served at your table, although the taste might differ vastly. It is even easy to buy a pack of kimchi at a duty-free shop on your way out of Korea at the airport, not to mention all the retail shops and department stores here that sell options ranging from kimchi produced by Korean food masters to more mass-produced packages.

One thing is clear: You must try kimchi jjigae, or kimchi stew, during your time in Korea and see how so many different versions are available at different price points and served in different ambiences.

Jjigae is a term that is used to indicate a dish that is a cross between a soup and a stew. Kimchi guk is milder with more water as guk means soup. Jjigae are boiled over a longer period or time, hence a saltier and more flavorful taste, and the color of the dish is usually a deep orange-like red.

What makes this dish different from others is that the spicy stew is widely available at restaurants but also a staple of home cooks in Korea. Kimchi jjigae is a great option for those who want to cook something warm to eat with just plain rice, as the very basic recipe is to add some kimchi to water, along with some gochujang, gochujaru and if available a can of tuna or some pork along with tofu. Even people with few skills in the kitchen can easily throw together a pot of kimchi jjigae and modify it to fit their tastes.

The dish is also a staple on casual menus for lunch or dinner especially among those who want to get a quick meal. Back in the 1970s and 80s, restaurants began to precook the stew in large pots for workers whose lunch and dinner times were not too long.

The exact time when Koreans started to eat kimchi jjigae more widely is difficult to track down. With a dining culture that enjoys something soupy accompanied by rice and other dry dishes, experts suspect that it slowly became a part of the food culture in Korea.

One of the most visited spots among international visitors who want to be in a more rustic ambience is the once-industrial hot spot, Euljiro. The area, which had seen a major drip off from its financial heydays, has been getting popular thanks to those who want to experience a journey back in time and then hit the new retro-style bars around the area. Eunjujeong offers only kimchi jjigae for lunch, and for dinner the same jjigae is served but with a side order of grilled sliced pork. This particular restaurant is popular among both locals and international visitors as it gives out a basket of assorted vegetables to wrap with a spoonful of the kimchi jjigae, which also aids in easing the spicy factor of the dish.

Since kimchi jjigae first gained popularity among workers in the central Seoul area, many of the popular spots are still centered around the Gwanghwamun and Jongno area, steps away from major tourist spots like Gyeongbok Palace and Myeong-dong. Gwanghwamunjip and Jangho Wang Gopchang are a few of the most popular restaurants. 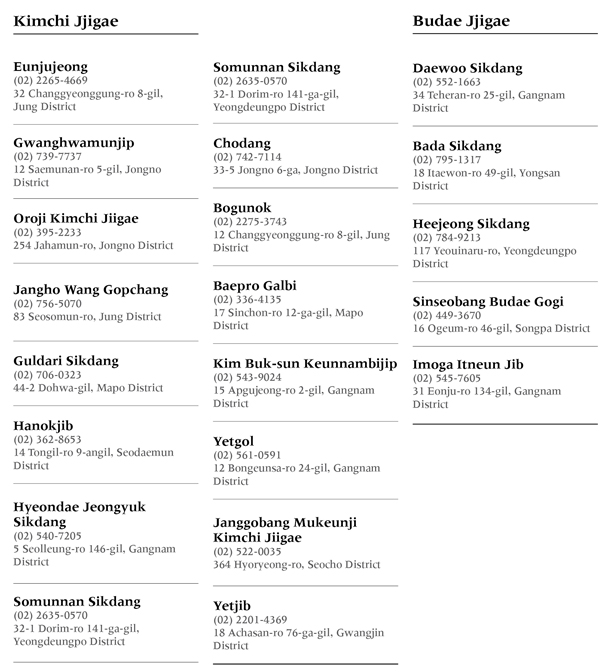 Most of these kimchi jjigae spots have fried eggs or rolled omelets on their menus to offer a balance within the mouth after devouring the spicy broth.

While the most common type of kimchi jjigae uses enough water to have some broth left at the bottom of your bowl, there are some variations available.

Kimchi jjim, which is made by braising kimchi for about an hour, is another popular choice. This braised technique means the kimchi is super soft, and people usually add mackerel to it when it is being cooked down for extra gamchilmat (the Korean word for what’s often known as the Japanese word umami). Many restaurants often use kimchi that has been stored for at least six months to add deeper flavors to the dish. This aged kimchi is called mukeunji in Korean.

Those who are not quite familiar with the fermented taste of kimchi should try getting used to the red-colored, gochujang-based broth first. A good dish to start with is budae jjigae. This particular dish, named after the Korean word for army as it is said to have originated near the U.S. military base in Korea, often doesn’t include kimchi, but other items that go into the dish are similar to the standard recipe for kimchi jjigae. Instead of pork, the broth which is seasoned the same as kimchi jjigae with gochujang and gochugaru gets its meat flavor from a variety of sausages and is often topped with tofu as well. The dish first became available when Korea started to get more supplies of processed meat products imported from the United States, and it quickly captured the taste buds of many locals. Even legendary restauranteur Anthony Bourdain tried the dish on his travels in Korea. “How could something so wrong be so right?” is what he said on his food show “Parts Unknown” while listing all the processed meats used in the dish.

One of the most popular spots among Koreans for budae jjigae is Daewoo Sikdang located close to Yeoksam Station, line No. 2, in Gangnam District, southern Seoul. This place adds a lighter element to the dish by using minari (a long-stemmed green vegetable) which is often placed in a spicy broth made with fish. Since it is located right by office-heavy streets, try going there a little after 1 p.m. or before 5:30 p.m. to avoid waiting in line. Heejeong Sikdang, located in another office-heavy area, in Yeouido, western Seoul, is also popular. Its version features extra portions of minced garlic, so be aware if you’re not a garlic lover.

If you’re in Songpa District in the southern part of Seoul, check out Sinseobang Budae Gogi for its offering of budae jjigae.