Reimagining housing as a long-term deal: Instead of paying large sum up front, tenants agree to stay 10 years

Reimagining housing as a long-term deal: Instead of paying large sum up front, tenants agree to stay 10 years 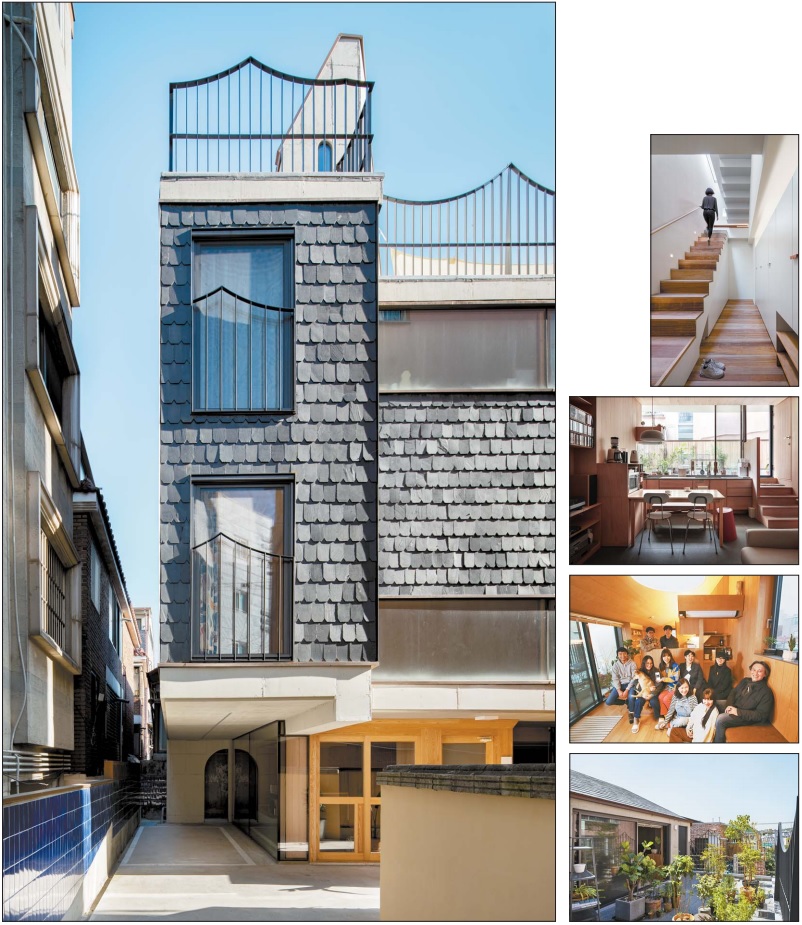 As the cost of housing continues to rise, securing an affordable room in Seoul is no easy task, especially for those who have irregular incomes. But one building in the city guarantees no hikes in monthly rent for 10 years and no lump sum security deposits. The house is also customized for tenants so that they can use the space for work and rest. The building was created by a landlord who “hates the social structure in which money brings more money.”

It sounds improbable, but the house, which is called Pungnyeon Villa, does exist and is located in the neighborhood of Eungam-dong, northern Seoul.

Pungnyeon roughly translates to a year with abundant crops, and villa is widely used when referring to condominium-style housing in Korea.

Kim Eun-hee, a big-name scriptwriter who penned shows like the Netflix original series “Kingdom” and the tvN drama series “Signal” (2016), is the owner of the building.

The way the Pungnyeon Villa is crunching numbers is different from other players in the real estate market, but it suggests some new possibilities.

The land was purchased at relatively low prices, and construction and the management of the building were carried out by experts.

One of the most appealing elements of the building is that it does not require security deposits. Tenants pay between 450,000 won ($380) and 700,000 won a month for rent depending on the size of their residential space, but one string is attached. The residents must reside in the building for 10 years. Each household’s rent stays the same for the entire 10 years.

To put it another way, the landlord does not have to worry about vacancies for that period of time.

“People working inside the real estate world assume that a landlord usually spends two out of 10 years without tenants [for a single building on average], but the landlord [at Pungnyeon Villa] does not have to worry about losing tenants,” said Kim Hana, the head of Seoul Social Standard, also known as 3siot, a social venture that constructs and manages shared housing. The company is in charge of managing Pungnyeon Villa.

“In addition, the landlord can expect a further rise in land prices,” Kim added.

The three families under the roof of the Pungnyeon Villa have known each other for a long time.

They launched a cooperative union in 2015 to build a house for themselves. There were more people in the beginning, but many of them opted out due to a lack of funds.

Two years into the project, it was on the verge of collapse, but the project gained momentum as Kim joined the housing project as an investor.

Kim is an acquaintance of Oh Su-jin and Kim Yeo-jin, one of the three families residing at the villa.

“A lot of people told me I should get a building in Gangnam [southern Seoul] with the money I earned, but I felt like it wasn’t right for me,” said Kim, who debuted as a writer with the 2006 film “Once in a Summer.”

“I learned about this project and I thought it was a good opportunity for me because I don’t have to be involved in the overall process from land purchase to construction to leasing and management,” Kim added.

When Kim joined the project, Im began searching for land and found a one-story old house built on 134.9 square meters (1,452 square feet) of land, facing north. The house was surrounded by six other buildings.

The house didn’t have many desired conditions, but Im saw potential in it.

“I thought the house was still good because it is close to a stream nearby and the house overlooked the stream between surrounding buildings.” 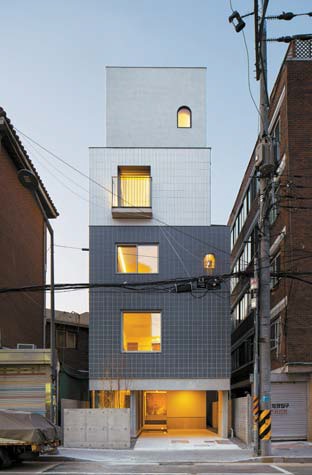 Im is an architect, but he was not involved in the design for the Pungnyeon Villa. Instead, he asked another architect, Kim Dae-kyun, to design it.

“This is the house that I’m going to live in, so I thought I might get easily carried away while working on it. So I asked someone else,” said Im.

It was a daunting project. The land was not an ideal shape to build a house and the house also had to meet the diverse needs of tenants.

But Kim willingly accepted the offer. “I have long been wanted to do this kind of project that can please the varied demands [of clients].”

Most multiplex housing divides each household by floors, but the Pungnyeon Villa doesn’t follow that old formula. Instead, it is split between working space and everyday space. The overall space is designed to encourage tenants to mingle with each other.

On one corner of the first floor, there is a snack bar for everyone to enjoy while the other part of the first floor and the second floor are used by Im and his family. The second and third floors are reserved for illustrator Heo Hyun-gyeong, and the third and fourth floors are occupied by writer couple Oh and Kim, mutual friends of Kim the writer.

Another characteristic of the villa is that each household has some space carpeted with stone tiles where residents can walk with their shoes on.

One of those spaces is on the third floor, for example, and it is used as a meeting room.

“I thought that people need some social space, even at home,” said Kim who designed the house.

Small details have been added for the convenience of residents. As each household shares a floor, dual walls are installed to cut off residential noise for overlapped space.

Also, a large semitransparent window is installed on the north side of the building. This window keeps the privacy of residents from neighbors and it also helps the house get enough sunlight.

“Although the building faces the north, it gets reflected sunlight from the other houses. Because of this, the building gets sunlight throughout the day,” said Kim.

Oh, who dwells on the third and fourth floors, said, “It felt a little uncomfortable at first because all the spaces are organically connected, but now I feel like my space is expanding.”

Another resident, Heo, said, “I’ve been living alone for a long time, but now I feel safer because I live with these people. I also like that the working space is separated from my private space.”

Landlord Kim has also built another similar building near Pungnyeon Villa. That building is called Yeoinsuk.

Yeoinsuk literally means accommodation for travelers in Korean. The term is mostly used when referring to cheap inns.

The building is built on a strip of land that is not popular at all.

A bakery is located on the first floor while the second floor is used as a guest house. The third to fifth floors are used by three writers.

“I split the total expenses for a single project and was able to build two houses with the saved money in the neighborhood that is relatively cheaper than other areas,” said writer Kim. 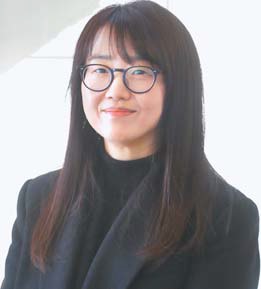 “With the first and second floors being used for commercial facilities, I can lower the financial burden on those who live from the third to fifth floors,” she added.

Yeoinsuk also does not require security deposits, and the monthly rental is between 420,000 won to 600,000 won. The other conditions are similar to those of the Pungnyeon Villa.

“There are a lot of junior [writers] who came all the way from other parts of the country and they are having some financial difficulties. I wanted them to live comfortably for long even though they do not own their houses. I also wanted to show there could be this unique way of leasing,” Kim added.

Yeoinsuk was designed by Im, one of the residents at the Pungnyeon Villa.

Each household has its own private terrace. High ceilings make each space feel more spacious.

“I hope I can keep doing this project by working with people who are interested in this style of living,” said Im.