Korea is not spared as shares collapse globally

Korea is not spared as shares collapse globally 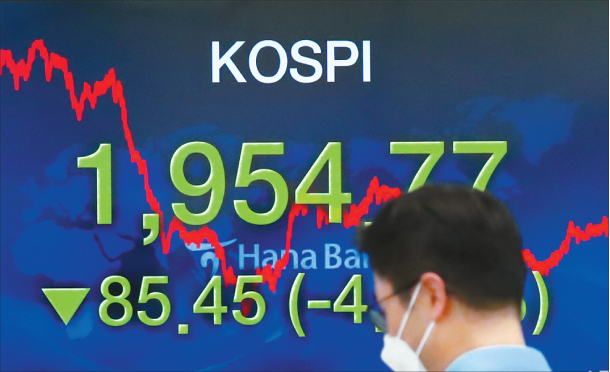 Employees wearing masks work at the dealing room of Hana Bank in Myeong-dong, central Seoul, Monday. The benchmark Kospi experienced a drop of 85.45 points, or 4.19 percent, as foreign investors dumped assets amid fears of the epidemic affecting the Korean economy. [YONHAP]

Korean stocks were not spared from the market rout Monday as fears of the coronavirus outbreak gripped investors globally and drove them en masse toward quality.

With some major markets in Asia down 5 plus percent in Monday trading - and the futures market indicating similar declines on Wall Street - the Kospi fell 4.19 percent.

Korea’s benchmark index opened below the 2,000 mark and never looked back, closing at its lowest level since last August. Foreign selling of Korean stocks was at the highest level ever, while the three-year Korean government bond yield hit an all-time low during the day.

Regionally, the damage was across the board. The Nikkei 225 was down 5.05 percent and Australia’s ASX 200 ended the day off 6.62 percent.

Crude oil prices collapsed more than 20 percent, and the U.S. 10-year bond fell below 0.50 percent for the first time even as investors rushed toward safe havens.

World markets and the Kospi had been showing some signs of life late last week. A 50-basis-point rate cut by the U.S. Federal Reserve and indications of some control being gained over the virus outbreak were reasons for hope. Investors started to believe that the drops may have been overdone.

On Friday, Korea’s benchmark rallied 2.68 percent and ended the day above the 2,000 level.

But the bottom fell out after news worsened globally over the weekend, with the outbreak taking hold and gaining ground in the United States and in Europe. Just as it seemed that the crisis could be contained and supply chains re-established, hope of a fast recovery started to dim.

“Confirmed cases were slowing down in China and the supply chain was looking better, but due to the rapid increase of confirmed cases in the United States and Europe, the demand side has taken a critical hit,” said Park Sang-hyun, an analyst at Hi Investment & Securities.

“An oil price shock from the global war on oil prices as well as the rising concern that Covid-19 could expand into a pandemic have spooked investor sentiment.”

Foreign investors led the rush for the doors. They sold a net 1.31 trillion won ($1 billion) worth of shares, an all-time high for a statistic that has been kept since 1999. Retail investors, looking for a quick rebound, purchased 1.27 trillion won worth of stocks.

The Kosdaq market was down 4.38 percent, losing 10.2 trillion won in market cap.

Safe haven investments did well in Korea as they did in international markets.

Three-year government bond yields hit 1.04 percent, down 3.7 percentage points. The yield at one point touched on the historic low of 0.998 percent on Monday.

“The dollar value is expected to depreciate with the Fed’s rate cut when compared to the yen or euro, but the uncertainties related to Covid-19 and an oil price drop might factor into further depreciation of the Korean won against the U.S. dollar,” said Kim Hyo-jin, an analyst from KB Securities.