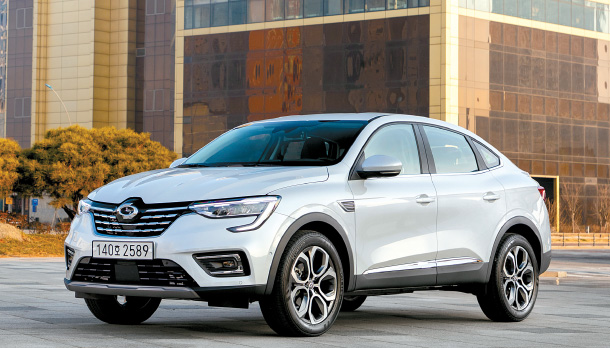 The past several years have been rough for Renault Samsung Motors.

Continually lagging behind its competitors in car sales, the Busan-based automaker ran into a series of obstacles - notably a bitter, months-long labor dispute - that seemed to bring it back to square one, regardless of the new vehicles or initiatives it rolled out.

Everything seemed to go wrong for the company last year. The ongoing fight with its labor union over wages didn’t help, and a lack of new models was reflected in desolate monthly sales figures.

With the XM3 SUV, Renault Samsung Motors is looking to make a dent in a market already bristling with high-selling competitors, including Kia Motors’ Seltos and GM Korea’s Chevrolet Trailblazer. The company hopes to sell 40,000 units of the XM3 by the end of this year.

Early sales showed that figure as far-fetched as it would seem. The company logged 8,542 orders for the XM3 until the official launch, and most of my colleagues at other publications complimented the car every time I asked. I was starting to get sick of hearing about the XM3.

Yet I agree with them, for the most part, and am now a believer that this new SUV might just do the trick to rescue Renault Samsung Motors. The car contains everything you could ask for, and at an affordable price level. The model is symbolic - a car that shows how hard the company has worked to fit in with the trend and provide mainstream offerings within its products.

For the most part during a three hour-long test drive earlier this month, I was reflecting on how ignorant I was for expecting the XM3 to be a frustrating and disappointing model, as has been the case with most of Renault Samsung Motors cars.

Looking back, I don’t think there was ever a time I liked one of their vehicles. They typically look ugly and counterintuitive, offering rides lacking both in comfort and power. I never considered buying a Renault Samsung Motors car as a viable option.

But with the XM3, it was certainly different, starting with the looks.

When I came across the XM3 for the first time at the test drive, I spent a few minutes trying to figure out what type of car it was. It looks like a mix between the SM6 sedan and QM6 SUV. From the front and back, it has the profile of a sedan, but when viewed from the side, it clearly has the dimensions of an SUV.

The crossover is longer but lower than the Seltos and the Trailblazer. Such dimensional difference adds sportiness and makes the XM3 look more dynamic.

And the car was surprisingly more spacious than it looked. Even though the XM3 is shorter in height than most compact SUVs, it maintains much-needed space for drivers and had plenty of legroom. I would have seriously believed it if someone told me that I was inside a mid-size SUV.

Artificial leather and cheap plastic-covered dashboards probably don’t add to luxuriousness, but then again, the car costs between 17.19 million won ($14,200) and 25.32 million won, so I probably shouldn’t ask more.

Once I got the car out on the highway, I had to admit to my low expectations for the company’s offerings. But there can be little debate over how impressively it drives.

Its TCe 260 engine is rated at 52 horsepower and 26 kilogram-meters (188 pound-feet) of torque - rather unimpressive numbers for a small SUV.

But try telling that to its 1.3-liter turbo engine. The car hugged the road and handled every turn without discomfort. It picked up speed effortlessly.

Its sport mode also excelled, easily delivering speeds in excess of the legal limit. The XM3 may not be a sports car, but it doesn’t take much imagination to think you’re inside one.

But be prepared to get used to the dual clutch system. If you’ve been driving around in Hyundai Motor and Kia Motors cars, you might feel the XM3 grumble and jerk between gears. Just spend around 20 minutes in it, and you will find a new way to drive.

The XM3 also provides an economical option for prospective buyers, as it boasts a nearly unrivaled fuel economy of 13.7 kilometers per liter (32.2 miles per gallon).

It’s good that Renault Samsung Motors took care to equip the XM3 with high-tech driving assistance systems - the lack of which has been a weakness for some of their models.

The lane-keeping assist, adaptive cruise control, collision warnings and parking assist features worked perfectly well. The systems may not be as aggressive and forceful as those from Hyundai Motor, something inexperienced drivers should be aware of before stepping in for a ride.

I was also delighted to find that the XM3 contained an online navigation system within its infotainment system. The car found the fastest routes with its real-time traffic data, and the navigation system is probably one of the best you can get from any car sold in Korea.

But the broader infotainment system was a little slow and laggy, which I found frustrating when trying to play music from my smartphone. And why are the media control buttons hidden behind the steering wheel on a lever? The inexplicable placement didn’t add much to the experience.

The model’s success might be the start of a prosperous year for the company. The coronavirus outbreak has been hurting most automakers, but who knows, the XM3 could for once place the company ahead of the competition.