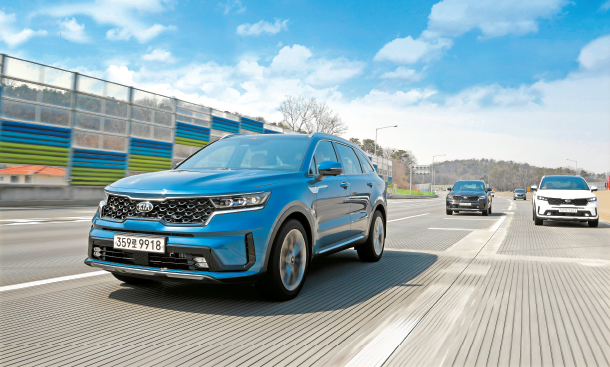 PAJU, Gyeonggi - Stand on any street in Seoul, and you will see at least one Sorento every three minutes.

While there have been some missteps with the model in the past, Kia Motors’ unfathomably popular SUV has clinched its place in Korean automotive industry history by appealing to uptown families looking to impress others at church on Sundays with price-efficient options.

Since the launch of the first Sorento in 2002, the midsize SUV gradually surpassed most competitors in the domestic market, reaching thousands of units in monthly sales, a milestone enjoyed by a very few models sold in Korea. The Sorento has become the most representative SUV model for middle-class families, capturing the hearts and aspirations of many Koreans.

For me, the problem with the Sorento is that it is uniquely generic. It’s a car that may check many boxes but gets top ratings in none. That impression was in no way contradicted when I test-drove the fourth-generation Sorento released last month.

While Kia Motors insists that the new Sorento comes with a massive design overhaul that deserves three paragraphs in the automaker’s press release, I couldn’t see much of a difference.

It’s been six years since its predecessor was introduced in 2014. For the new Sorento, the automaker applied a design philosophy dubbed “refined boldness,” which is epitomized by the front end and LED headlamps connecting to a “tiger nose” grille at the center.

The same concept was employed quite successfully with the K5 sedan launched last year. But after seeing it out on the streets for months, I’m worried that Kia Motors is squeezing out every last drop of that design concept and starting to repeat itself.

The back of the new Sorento looks no different from the Telluride or the Mohave the Master, hinting that designers simply recycled what worked for those high-selling models and earned some downtime.

Maybe that strategy makes sense. More than 26,000 people have rushed to order the new Sorento in the first 18 days, and a lot of them were people in their 30s and 40s.

Kia Motors believes that a family-friendly look with expanded interior space and an array of high-tech convenience and safety features helped the company achieve unprecedented pre-release orders, but I think it has said the same thing about all of its new models since last year.

During a two-hour test drive to Paju with the 2.2-liter diesel engine Signature trim, I spent every minute trying to figure out what’s so unique about the new Sorento in terms of the interior or on-the-road performance - and I failed big time.

All of the premium-ness promised in the new SUV was also available in the Mohave the Master, and all the high-tech features reminded me of the K5. If Kia Motors wants to argue that the new Sorento has the best of both worlds, that could be true. But what’s new in the new Sorento?

I’m still not really sure.

The car has a highway driving assist feature, lane-keeping assist and collision avoidance warnings, features I find in many cars I test. The features did what they are supposed to do, but they were never particularly impressive.

A fully digital dashboard and large touchscreen display infotainment system are also there, and that’s fine, but the last time I didn’t see them in a car was in my beat-up Elantra back in Sacramento.

Still, the Sorento hits the sweet spot for families with its well-designed back seats. The model I drove had three rows of seats, with two in each row. Each seat had its own USB port and individual air-conditioner, which are guaranteed to stop the howling of kids in the back on a long ride.

The third row of seats was a little squeezed, so maybe it’s better to keep them folded unless you have unwanted neighbors’ kids to haul around.

On the road, the car is a little loud. Acceleration boosted not only the speed, but also an influx of unwanted noise throughout the car. The car feels stable on the road but not as powerful or dynamic as promised. I couldn’t tell the difference between Sport and Comfort modes of driving. The car became awfully weak when switched to Eco mode.

I’m not saying the new Sorento is bad. The SUV gets impressive fuel mileage. The SUV is rated at 14.3 kilometers per liter (33.6 miles per gallon), and during my drive, the car traveled an average of 17.5 kilometers per liter, even though I stepped on the gas multiple times. I don’t know if Hyundai Motor’s Santa Fe, Chevrolet’s Blazer or the QM6 from Renault Samsung Motors can get even close to that level of mileage.

The new Sorento, to me, was an O.K. car, but it surely wasn’t the best or the worst I have ever tested. And that lack of uniqueness is not my type, but maybe that’s what helped Kia Motors bag an unprecedented number of presale figures.

In terms of design, the car looks far from being gender neutral. Its bulk screams masculinity. I felt the same about the Ford Explorer launched late last year.

It has everything you would expect from a Kia Motors car, but there’s nothing new about it. Despite my distaste for the new Sorento, sales could motor ahead through this year even though the coronavirus outbreak has cut some demand for new cars in general.