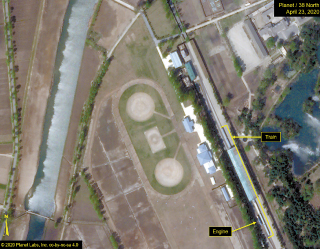 North Korean leader Kim Jong-un’s train has been parked at the Leadership Railway Station servicing his Wonsan compound since at least April 21, the website 38 North said Saturday, citing an analysis of recent satellite photos of the area. [AP/YONHAP]

North Korean leader Kim Jong-un missed an annual ritual to mark his grandfather Kim Il Sung’s birthday because one of his personal bodyguards was suspected to have contracted the coronavirus, according to a source in China familiar with North Korea affairs on Sunday.

Kim Jong-un did not pay an annual visit to the Kumsusan Palace of the Sun on the occasion of North Korea’s founder Kim Il Sung’s birthday on April 15, prompting speculation over the young leader’s health condition.

However, the source told the JoongAng Ilbo that Kim skipped out “because there was a problem within the Supreme Guard Command in charge of guarding North Korea’s top leader.”

The source indicated that there had been a coronavirus case among a member of Kim’s personal bodyguard team in charge of closely escorting the leader. This would have caused issues not only with the airtight guarding of the leader but also would have put Kim in danger of infection as well.

Kim has frequently been spotted flanked by a dozen personal bodyguards in black suits during public appearances including his summits with President Moon Jae-in at the inter-Korean truce village of Panmunjom and with U.S. President Donald Trump in Singapore and Hanoi, Vietnam, in 2018 and 2019.

His personal bodyguards are in charge of checking routes and shadowing the leader on his outings, but a coronavirus infection in the Supreme Guard Command would put a restriction on Kim’s public appearances.

Kim last appeared in North Korean state media on April 11 presiding over a key ruling Workers’ Party meeting. After missing Kim Il Sung’s birthday anniversary, there were reports that the young leader was critically ill after a recent heart surgery.

A report by CNN last Tuesday alleged that Kim was in “grave danger” after undergoing a cardiovascular procedure, citing a U.S. official who said that American intelligence was “monitoring” news about Kim’s health. Daily NK, a South Korean digital media outlet, earlier reported that Kim had undergone heart surgery at a special facility near Mount Myohyang on April 12 as a result of his obesity, smoking habits and overwork.

Seoul officials have downplayed concerns over Kim’s health, while Gen. John Hyten, the U.S. vice chairman of the Joint Chiefs of Staff, said the Pentagon assumes that Kim is “still in full control.”

China reportedly sent a team including medical experts to North Korea to advise Kim last week. Reuters reported Saturday, citing two people familiar with the situation, that the delegation was led by a senior member of the Chinese Communist Party’s International Liaison Department in charge of relations with North Korea and left Beijing on Thursday.

Geng Shuang, China’s Foreign Ministry spokesman, said last Tuesday in a press briefing, on the reports on Kim’s health, “I’m not sure of their source.” But he said that China and North Korea “are friendly neighbors linked by mountains and rivers” and that they “stand ready to work with the DPRK to continuously move forward bilateral relations,” referring to the acronym for the North’s official name, the Democratic People’s Republic of Korea.

A Western diplomatic source in China familiar with North Korean affairs said, “There is nothing wrong with Chairman Kim’s health to my knowledge.”

Another China source in Beijing said that North Korea has recently requested for Covid-19 testing kits. One month ago, North Korea had asked for masks and protective gear, but this seems to have changed to a need for coronavirus tests.

North Korea has officially maintained that it has no confirmed coronavirus cases.

A train likely belonging to the North Korean leader has been stationed at Kim’s compound in Wonsan on the country’s east coast since last week, according to recent commercial satellite imagery.

The images released Sunday by 38 North, a U.S. website monitoring Pyongyang, showed a train seen as belonging to Kim “parked at the Leadership Railway Station servicing his Wonsan compound since at least April 21.” The train was not present on April 15.

“The train’s presence does not prove the whereabouts of the North Korean leader or indicate anything about his health, but it does lend weight to reports that Kim is staying at an elite area on the country’s eastern coast,” the website added.

There have been reports that Kim is staying at a villa in Kangwon Province and visited Munchon, near Wonsan, where the North Korean military launched cruise missiles on April 14.

Kim Jong-un continued to remain out of the public eye over the weekend. Saturday marked the anniversary of Kim Il Sung’s founding of the North’s Korean People’s Revolutionary Army.

North Korean state radio reported Sunday that Kim Jong-un sent a message of appreciation to workers building facilities in Samjiyon in the northern Ryanggang Province at the foot of Mount Paektu.