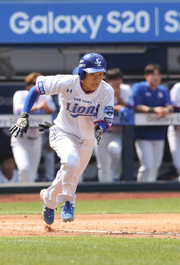 Samsung Lions’ rookie infielder Kim Ji-chan may be short in stature but he’s strong enough on the field to compete against the KBO’s best. Born on March 8, 2001, Kim was drafted by the Lions during the rookie draft last year.