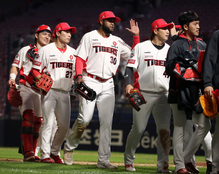 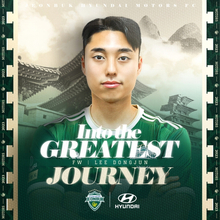 Lee Dong-jun will return to the K League next season with Jeonbuk Hyundai Motors after spending a year in Germany with Hertha Berlin.

Gwangju FC secured the top spot in the K League 2 on Wednesday with four games still left to play, ensuring their return to the top tier K League 1 just one year after being relegated.

Two K League 2 clubs — Gwangju FC and Bucheon FC 1995 — beat top-tier teams to advance to the round of 16 at the FA Cup on Wednesday.

FC Seoul beat the Suwon Samsung Bluewings in the first so-called super match of the 2022 K League season on Sunday. 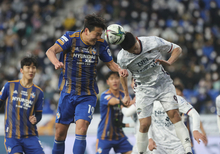 The new K League season started over the weekend, with Gimcheon Sangmu coming fresh off promotion to hold last year's runner-up Ulsan Hyundai to a 0-0 draw in on Sunday.

Gangwon FC beat K League 2 club Daejeon Hana Citizen 4-1 after a big comeback in the second leg of the promotion-relegation playoff on Sunday to secure their spot in the top tier next season.

After just over a week without a team to call home, Lee Seung-woo has signed with K League 1 club Suwon FC.

With just one more week of K League action left, six clubs will play their final matches this weekend. Jeonbuk look set to become the the first team in Korea's two most popular leagues — the K League and KBO — to win a title for five straight years.

With a few weeks left of K League 1 action, Gangwon and Gwangju are currently fighting to avoid relegation. In the K League 2, Gimcheon Sangmu have locked in a ticket to the first division, while Anyang and Daejeon to face off for a shot at promotion