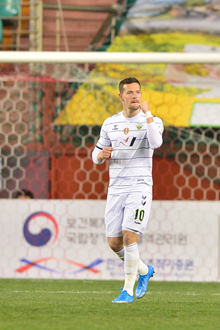 The 2021 K League 1 season wrapped up its first week, with fans allowed back into stadiums unlike last season due to the Covid-19 pandemic...

Pohang Steelers' Song Min-kyu is playing his third season in the K League, and so far it's proving to be his best one yet. When the start of the season was postponed, the league launched a video game tournament, between the players.

Former Korean international Oh Beom-seok has rejoined his former club Pohang Steelers after 13 years away. The K League 1 club announced Tuesday that Oh, 35, has signed for the rest of the 2020 season.