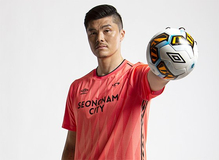 Kim Young-kwang, the thirty-seven-year-old Seongnam FC goalkeeper and oldest player in the K League is not only still in the game, but might just be stronger than ever. 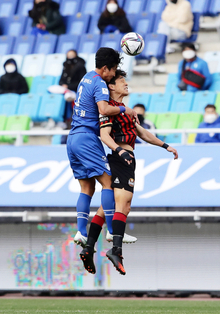 FC Seoul were the only one of the top four teams in the K League 1 to walk away with a win over the weekend, beating the Suwon Samsung Bluewings 2-1 on Sunday at Suwon World Cup Stadium in Suwon, Gyeonggi.

The 2021 K League 1 season wrapped up its first week, with fans allowed back into stadiums unlike last season due to the Covid-19 pandemic...

Kim Nam-il, the second-year manager of Seongnam FC, is determined the Gyeonggi club will come back stronger this season, after a difficult start last year.

There will be plenty of scoreboard watching and number crunching come Saturday afternoon, as three clubs at the bottom of the K League 1 table will look to avoid relegation in their final matches of 2020.

The 12 clubs in the K League 1 was split into two groups on Sunday, with some late drama seeing clubs in the middle of the table switch places. Gwangju FC beat Seongnam FC to jump from eighth to sixth to grab the last spot for "Final A." 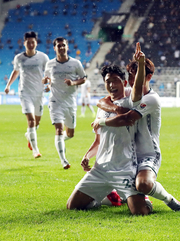 After just a few months with Seongnam FC, Na Sang-ho is already being called the next Hwang Ui-jo. Na, who was a member of Korea’s U-23 national football team at the 2018 Asian Games, has earned the nickname “little Hwang Ui-jo” from Seongnam fans.

Seongnam FC lost 1-2 against Daegu FC at Tancheon Sports Complex in Seongnam on Sunday, but the home team still left the field with something to celebrate when the referee blew the whistle.