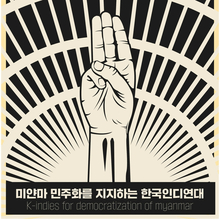 Local indie singers will release a song dedicated to the citizens of Myanmar who are fighting for democracy. An association of Korean indie musicians that support the democratization of Myanmar announced Thursday that they will be releasing a...

Local singers will release new music to honor the 40th anniversary of the 1980 Gwangju Democratic Uprising which falls on May 18, starting with a rearranged version of “March for the Beloved.” KBS will reveal a version of the song, titled “2020 March