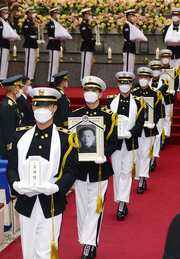 A burial ceremony is underway at Daejeon National Cemetery on Wednesday for seven soldiers killed in North Korea during the 1950-53 Korean War. They are among 147 South Korean warriors whose remains returned home from the North via Hawaii...

Four Buddhist paintings from the Joseon Dynasty (1392-1910), which were illegally shipped out of the country soon after the 1950-53 Korean War, will be brought back home from the United States next month, a local Buddhist sect said Thursday.

The remains of four Korean teachers found dead in an avalanche in the Himalayas returned home Saturday. The four victims, all of them school teachers in South Chungcheong Province, had left Korea on Jan. 13 for volunteering work in Nepal.