The main opposition party on Tuesday said it will file an appeal to the high prosecutors' office to challenge the district prosecutors' decision to clear Justice Minister Choo Mi-ae of allegations she abused her power to seek favors for her son. 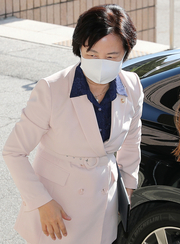 The prosecution on Monday cleared Justice Minister Choo Mi-ae of allegations that she had abused her power to arrange special treatment for her son while he was serving the military in 2017.

Prosecutors retrieved Tuesday a transcript of a phone call made to the Ministry of National Defense to request an extension of a medical leave for Justice Minister Choo Mi-ae’s son in 2017, according to sources.

A conservative activist group on Thursday filed a criminal complaint asking prosecutors to investigate whether Justice Minister Choo Mi-ae intervened to get special treatment for her son while he was serving his military duty in 2017.

An Army captain admitted to having received a phone call in 2017 from an aide of Choo Mi-ae, the current minister of justice, to extend her son’s medical leave when he failed to return to the base in time, an opposition lawmaker said Wednesday.