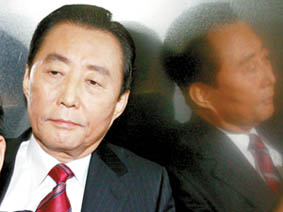 Goh Kun, a former prime minister and a much-talked-about presidential contender, quit the race yesterday, declaring that he would also retire from politics.
At his office in Yeouido yesterday morning, Mr. Goh called a press conference to announce his decision, but dozens of supporters blocked him as he tried to enter the building to make the announcement, in a demonstration of loyalty to him and his presidential ambitions. Mr. Goh distributed a statement instead.


“I have decided not to run in the 17th presidential election,” the statement read. “For nearly one year, I tried to find a politics of harmonious coexistence, but I realized that my ability was not enough to do so in this confrontational political structure. I humbly accept the evaluation by public opinion that my activity resulted in an unsatisfactory outcome.”
Mr. Goh told his supporters who protested his decision, “Please accept it, because I decided so with a feeling of making a grave sin to you.”
Mr. Goh’s aides said they tried to dissuade Mr. Goh from withdrawing, but without success. Mr. Goh had been considering the action for the past two weeks or so, they said, as public opinion polls showed him gradually losing ground. In a Joong-Ang Ilbo poll in November, his support rate was 22.5 percent, but the figure had dropped to 18.1 percent one month later.
The announcement reverberated quickly throughout the political scene. The Grand National Party’s three presidential hopefuls, Park Geun-hye, Lee Myung-bak and Sohn Hak-kyu, all said they were surprised by the decision but expected him to continue to play a role in Korean politics.
Uri’s chairman, Kim Geun-tae, said he was disappointed at losing a power figure on the liberal side of the Korean political spectrum. With a touch of acerbity, he said, “He may feel comfortable by quitting, but it was an inappropriate act toward the people.”Mr. Kim added that Mr. Goh’s withdrawal would have no effect on Uri’s plans to merge with other liberal Korean political groups, including Mr. Goh’s bloc.
Uri members made it clear that Mr. Goh’s loss hurt them in their efforts to redefine Korean liberal politics in a way that did not include the unpopular President Roh Moo-hyun.
Representative Kim Sung-gon said, “We are feeling a sense of loss because the major target of our merger is gone.” Another Uri lawmaker, Yum Dong-yun, said, “We are partly responsible for failing to manage him appropriately,” and Choi Jae-cheon worried that with Mr. Goh gone, it would be even more difficult to escape the label of “Roh’s party.” He continued, “Then we will lose the people’s trust completely and fall like dominoes,” he said.
The Blue House did not react. The president and Mr. Goh have engaged in a name-calling spat recently, which began last month when the president said his appointment of Mr. Goh as prime minister had been a failure.
The Democratic Party, which had also wooed Mr. Goh, did not hide its disappointment either. “Mr. Goh’s goal of unifying middle-of-the-road reformers coincided with that of the Democratic Party, and it is regrettable that he decided to quit,” said Yoo Jong-pil, the Democrats’ spokesman.
His withdrawal leaves nearly 20 percent of the electorate without a favored candidate, and political machines began to gear up to capture their interest. Outside observers were split about who might be the biggest beneficiary.
“Previous polls showed that Mr. Goh’s supporters had once supported Lee Myung-bak and Park Geun-hye,” said Kim Heon-tae, the head of the Korea Society Opinion Institute, referring to two leading conservative presidential contenders. “It is possible that the progressive vote will shrink further.”
Ahn Boo-keun, head of The Opinion, had the opposite view. “Mr. Goh’s supporters will temporarily back Mr. Lee or Chung Dong-young, the former Uri chairman,” Mr. Ahn said. “But they will eventually move to the candidate representing the new liberal power.”