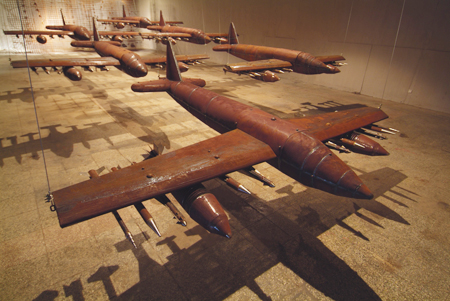 BUSAN ― Last year Chinese art saw a boom in the global market. This year Indian art looks set for a bumper year. According to the Indian auction house Ossian, the price of Indian art has risen 14 times since 2005.
This Indian wave has struck Korea as well, led by the Arario gallery, which has formed an exclusive contract with Indian artist Tallur L.N. The Arario gallery in Beijing also had an exhibition last September where they invited 12 Indian artists. The gallery claims that this exhibition caused a sensation in Beijing by introducing the leading figures in contemporary Indian art to a Chinese audience.
Now the Busan Museum of Modern Art has created an exhibition titled “Indian Contemporary Art - Hungry God.” It opened on Tuesday. It includes works that were showcased at Arario’s Beijing exhibition. 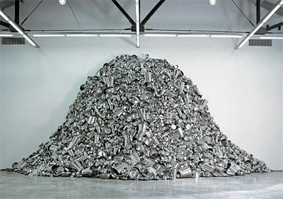 
This is not the first time that Indian art has been shown in Korea. An exhibition was held last November at the Seoul Arts Center Hangaram Design Museum, titled “Hybrid Trend.” Because it was a joint exhibition, however, with Korean and Indian artists, the exhibition was more like an appetizer.
At the Busan exhibition, around 50 works including paintings, sculptures, installations and videos will be introduced, giving the exhibition a wide scope of genres.
One of the pieces that has been grabbing attention is Nataraj Sharma’s stunning installation “Air Show,” in which eight replicas of military planes with wing spans of two meters (6.5 feet) or more, hang in midair.
Walking towards these planes, one feels as though the shadow of death is falling down upon the ground. The artist explained that he wanted to express the beauty of flying that he felt as a child watching air shows and incorporate the feeling of fear as the planes flew past over head. Although the artist would have been content to hang small, wooden aircraft, at the suggestion of the Arario gallery he decided to go ahead with these huge planes.
Subodh Guptha is a prominent artist in India. His piece, in which a travel bag is placed on a conveyor belt, was shown at Art Basel in Switzerland and sold for $850,000, a high enough figure to grab the attention of the international art market. In this exhibition, the artist piled thousands of plates and bowls and made a mountain. The piece is an artistic critique of India’s caste system. The artist pointed out that although in India people are discriminated against according to the caste system, they all use these dishes.
In Jitish Kallat’s painting, “Suffix (Herbaceous Perennial)” the artist combines acrylic and oil paints and includes sculptures of chicken feet to show visitors something that is markedly different from two-dimensional paintings.
Other works that showcase the creativity of Indian artists include a sculpture of a hungry child selling newspapers on the street; an installation work that shows a newsstand turning into a sofa as the police enter a room; and a video piece that shows a street vendor painting a plain white bird in multi-colors and selling it. 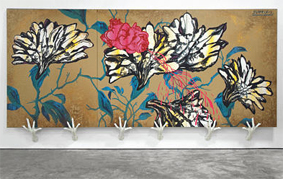 “5 Offerings for the Greedy Gods” by Subodh Gupta


“The reason that Indian art is relevant for today’s global art market is that the artists meld the old traditions of this ancient country with the problems of today and create a whole new genre. The artists possess a unique creativity which is in tune with the international art market at this time,” said Gwak Jun-yeong, the curator for this exhibition.