They may be Hooters but will they fly?

They may be Hooters but will they fly? 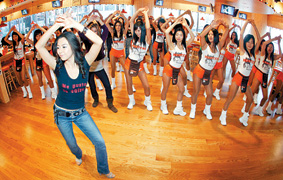 The first thing to know about the American-owned company is that it has not become a billion dollar enterprise by promoting owls. The U.S. version of Hooters has little to do with aural ornithology and everything to do with skimpily clad young women.
Now Hooters has landed in Korea, in a posh new restaurant south of the Han river. The company is aware that their business requires rules and a copy of the employee’s handbook for Hooters girls in Korea reveals some telling information about the job.
On the first page of the guide, which the company’s new female staff received during their orientation workshop earlier this month, employees are reassured that they should feel free to raise “any harassment complaints to their management staff” at any time. 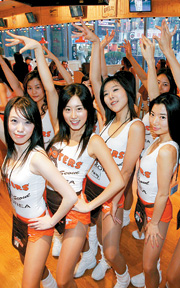 Hooters girls, left, posing during a workshop at the new restaurant south of the river.


But their situation is more complex than that. Elsewhere the handbook acknowledges that sexual innuendo is inevitable as the contract for the Korean Hooters girls requests that, at work, they behave as if they are “on a date” and “an actor on a stage.” Other conditions designed to make employees conform to the Hooters ideal follow.
Tattoos must not be displayed. Hooters girls should be “camera-ready” at all times and must project the look of “cheerleaders, surfers, and the girl next door” to the restaurant’s customers, who are predominantly male.
These rules were not a surprise to Kim Se-a, 24, as she displayed herself in a white spandex tank-top and orange running shorts, the trademark uniform of the famed American restaurant chain, which originated in Atlanta, Georgia. In fact, she believes her experience at Hooters could help her build a modeling career in the future.
“I was very excited when I saw that Hooters was coming,” says Ms. Kim, with a shy smile. “The next day I sent in my application. I even invited my mother to the restaurant’s tasting event and she approved of my working here. There are girls on the streets of Seoul walking in mini skirts and tank-tops worse than this outfit. The uniform we are wearing is a T-shirt compared to that.”
Kim Ji-eun is another Hooters girl, who was selected after a careful screening process that took over a month. She was previously a cheerleader for a national basketball team.
“We were told that a Hooters girl is different from a waitress,” she says. “We are more like entertainers.”
Indeed, the restaurant caught the eye of many young Korean women who aspire to careers in show business.
During a recent workshop, which included intensive coaching from the company’s veteran trainers from the U.S. ― Hooters’ calls them “jump-starters” ― the Korean Hooters were shown clips from a videotape of the Hooters’ annual international swimsuit competition held in Las Vegas. Each year selected Hooters girls from each region compete and can win over $50,000. Korean girls will be sent to this year’s competition.
park Kyu-ho, the director of operations for Hooters Seoul, admits there is potential for Hooters girls to have considerable media exposure.
“We are not an entertainment agency,” he said. “But they will definitely have opportunities through events like Fox Sports and Hooters teaming up.”
So far Hooters has over 500 outlets around the world. In Asia, Korea is the fourth franchise to open, following China, Singapore and Taiwan. Like most global food companies, Hooters outlets offer the same menus, the same slogan ― “delightfully tacky, yet unrefined”― and the same uniforms and atmosphere. 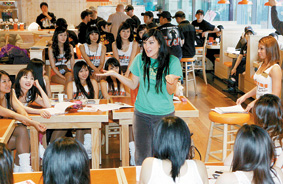 A “jump-starter,” or a veteran trainer, from the United States, during a local workshop.


But aside from common duties shared by Hooters girls around the world, there are variations that arise from cultural differences. The Korean company that owns the Seoul franchise has been cautious about the sexual overtones in the restaurant’s concept, which openly uses the female body as a major selling point. But in a country that still tries to maintain a conservative attitude towards female sexuality, the restaurant’s owners have yet to establish a clear brand identity.
While Hooters in America defines itself as “a neighborhood restaurant” or a casual sports bar, the Korean operation promotes itself as “a family restaurant that targets customers from children to elders.”
The company’s efforts to diminish the overt sex appeal of the brand was evident in their choice of location. The Seoul branch is in one of the city’s most expensive areas.
The neighborhood, which survives by attracting a crowd of wealthy shoppers to luxury boutiques, is in stark contrast to the restaurant’s image back home, where it is usually a blue-collar hangout in lower middle class neigborhoods. The Seoul location is akin to putting a Hooters on Madison Avenue next to Prada. Moreover, the tendency of Hooters management in the U.S. to treat women as sex objects has been toned down by the Korean company’s female president, Lee Geum-hye, who has been trying to establish a sisterly model for the Korean Hooters.
“We hope to compensate the Hooters girl through a model that includes intelligence, beauty and a strong dedication to service,” Ms. Lee says. “I am aiming to turn the job into something every young Korean woman wants to do at least once in her lifetime.”
The restaurant has good reason to be apprehensive. Businesses improperly using the name Hooters in Korea have been the subject of 15 lawsuits over the past 10 years. The suits were mostly associated with underground “sexy bars” that featured girls in bikinis serving alcoholic beverages in addition to other sorts of illegal services.
“There are certain things a Korean Hooters girl is not allowed to do,” says Mr. Park. “They are not allowed to take orders sitting next to the customers. That’s a different policy from Hooters girls in the West where they can casually hug customers.”
Despite these efforts to guarantee decorum, there are mixed opinions about the restaurant’s chance of success in Korea.
“Personally, we tend to find women dressed in long skirts far more sexy and appealing than those who are in a tank-top and shorts,” says Heo Eun-seok, 30, an engineer in Seoul. “We are more accustomed to the idea of sexuality being something secretive. The concept of bringing sex into a broad daylight may be ideal, but it just seems unnatural to us. The idea seems very American.”
Despite that, on a visit last Sunday, three days after the opening, the restaurant was packed with a diverse mix of customers.