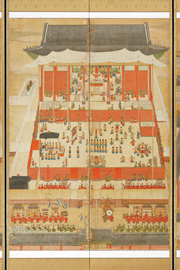 The court painting “Musinnyeonjinchan Tongmyeongjeonjinchan” [roughly translated as “Grand Banquet on the Year of Musin”] (1848) commemorates the royal banquet held in Changgyeong Palace. Provided by the National Museum of Korea

“Our taste is governed by our memories,” said Han Bok-ryeo, after delivering a lecture at the Institute of Korean Royal Cuisine. “And because many Koreans today don’t have memories of eating ‘real’ Korean food, they look for decoration rather than the authentic taste.”
Earlier that morning, 20 students had signed up for a 10-day course on Korean royal cuisine. The institute, which moved into a converted two-story hanok 10 years ago, is nestled behind the former royal garden in Anguk-dong, central Seoul. Ms. Han works and lives here. When the course began last Monday, she started with some basics, from the origins of Korean food to its primary ingredients to the food’s philosophical underpinnings. All of which are part of her emphasis on recreating the authentic taste of traditional cuisine.

Today, Korea’s most recognized living master of Korean royal cuisine believes that Korean cooking has drifted from its roots. For most of her life Ms. Han, 59, has taught Korean cooking, written numerous cookbooks and advised restaurateurs. Over the past 30 years the Institute has certified hundreds of chefs. They meet regularly to promote Korean cuisine. 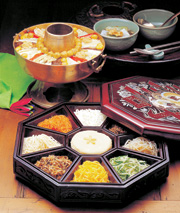 some of the most elaborate dishes in Korean royal cuisine include Gujeolpan and Sinseollo.

But their efforts were dwarfed last year by the popular television drama “Daejanggeum,” or “Jewel in the Palace” which aired in Korea and around Asia. The drama, set in the 16th century, has a female lead, a palace chef making Joseon Dynasty royal cuisine. She prepared exquisite dishes, unknown to most Koreans, and sparked great interest in traditional cooking.
Ms. Han spent months giving advice to the series. After years of gathering dust in lecture rooms and museums, the festive and vibrant recipes of Korean royal cuisine came to life. A cookbook she produced, “Gungjungeumsik” [Chungrim, 2004], based on the drama became a bestseller in Korea and Japan.
Ms. Han is the oldest daughter of Hwang Hae-sung, who died last month aged 85. The late Ms. Hwang was designated as Intangible Cultural Property No. 38 in 1972, one year after her master, Han Hee-soon, had died aged 82. For years it was normal for the title of Cultural Property to be handed automatically from parent to child, but the policy has changed. Now the board of the Cultural Heritage Administration, a government body, will decide who will inherit Ms. Hwang’s title. Currently there are two candidates, Ms. Han and Jung Gil-ja, another apprentice of Ms. Hwang. Ms. Jung, 58, currently heads the Traditional Snack Institute, an affiliated body that specializes in tteok (rice cake) and byeonggwa (snack).
As a way to preserve and maintain Korea’s cultural heritage, the Korean government established the Cultural Heritage Administration in 1945 and designated masters with valuable skills.
Han Hee-soon was a royal chef who served the last two kings of Korea’s Joseon dynasty, Gojong, who reigned from 1863 to 1907, and his son, Sunjong, who was dethroned three years after he became king. Ms. Han’s mother, who taught nutrition at a women’s college, was asked to add Joseon cooking to the curriculum, so she contacted the royal chef who was by then living with King Sunjong’s widow. Hwang’s apprenticeship with the royal chef, which started in 1944, went beyond cooking. She also created the first written compilation of the recipes that define Korean royal cuisine. 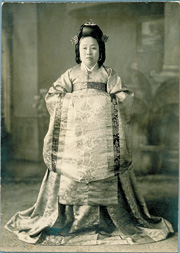 Han Hee-soon was designated as Korea’s Intangible Cultural Property No. 38 after she cooked for the country’s last two kings.

Ms. Hwang’s cookbook appeared in 1957 and she submitted it to the Cultural Heritage Administration, but her encounter with the conservative male administrators ― who said “cooking is for housewives” and thus chefs could not be cultural properties ― is legendary. She had to cook many impressive meals before the officials were convinced and in 1971 her wish was granted. Han Hee-soon became an official first-generation master.
Scholars from the Joseon Dynasty left behind numerous writings, which have became a vital resource for understanding the past. These include some tantalizing facts relating to the culinary life of kings and queens. Recording recipes was not practiced then. One of the Joseon Dynasty reference books, “Jeongri Euigwe,” records etiquette and rituals at the 70th birthday event for King Jeongjo’s mother. In the chapter on the queen mother’s excursion on Feb. 16, 1795, the journal, written in Chinese characters, details an elaborate breakfast consisting of 13 dishes. Along with fish soup, pheasant and grilled beef is a bowl of steamed rice with red beans. There are detailed descriptions of the types of plates used but it puzzles modern scholars that nowhere in the book does it describe how each dish was cooked.
These gaps in the historical record make some Koreans believe that the fine taste of royal cuisine was the result of the instinct or talent possessed by a few great chefs, rather than recipes with concrete measurements. Nevertheless the mother and daughter team of Ms Hwang and Ms. Han worked together to rewrite ancient recipes. Together with her siblings and Ms. Jung, they reinterpreted important ancient books on a variety of Korean dishes from kimchi to fermented sauce to rice cake, and published modern versions.
“In the old days, all the women were obliged to work in the kitchen. Preparing an exquisite meal everyday for males in the family was a wife’s foremost duty,” said Ms. Han. “Times have changed, and no one wants to spend so many hours in the kitchen. Korean cuisine needed to be modernized for modern families and diners.”
One of the important books which the masters of Korean royal cuisine helped bring to light is “Eumsikdimibang” [The Institute of Korean Royal Cuisine, 2004], which is believed to have been written around 1670. The original book, which details the food made for aristocratic families, was discovered in the early 1960s in Andong, North Gyeongsang province.
The new cookbook, “Joseon Dynasty Royal Cuisine” [The Institute of Korean Royal Cuisine, 2006], co-authored by Hwang, Han and Jung, lists a dish called “Jeokduban,” or red bean rice. This rice is usually served as part of a full-course meal in upscale restaurants today. The book has a step-by-step recipe for the dish that is believed to have been served to the queen mother on the morning of Feb. 16, 1795. Cuisine masters have also drawn on old paintings of banquets, such as the famous 1848 version of a grand party thrown for the King’s mother in Changgyeong Palace.
In feudal society, royal cuisine spread among aristocrats. But, as Korea modernized, and new money flowed, royal cuisine became popular among the affluent class. The war in 1950 brought a major shift in and Korea’s royal cuisine gradually disappeared. The majority of Koreans do not remember a childhood filled with authentic Korean cuisine. 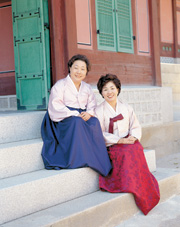 Ms. Han often expresses deep frustration that, for many years, Korean cuisine has been regarded as cheap, messy and crude. She expects a more positive direction as a new generation of Koreans here and abroad have made bold attempts to reintroduce upscale Korean cuisine. At the same time, she is worried that many dishes may not be authentic “Just because you think you’re preparing something fancy doesn’t mean that you can call it Korean royal cuisine,” Ms. Han said. “ True royal cuisine has to be very special and exquisite.”
Royal cuisine epitomizes the finest of traditional Korean cuisine. Royal chefs did their best to create dishes made from the best ingredients and recipes from all regions. Every dish is supposed to enhance the medicinal effect in every ingredient, making sure they harmonize the Oriental ying yang and the principle of the five elements not only within the dish itself but also in the body when the food is properly prepared and consumed.

Ms. Han decided the best way for her to bring Korean royal cuisine to contemporary diners was to create a restaurant. Gungyeon (02-3673-1104), located in the upscale neighborhood of Gahse-dong, opened last year. A handful of families from Korea’s high society, who were the first to notice the difference in the taste of the food, spread the rumor that the restaurant serves the best royal cuisine in Seoul. They speak of one of Gungyeon’s specialties, Sinseollo (roughly translated as “a pot for mountain gods”) as “the most unforgettable dish, so heavenly that it makes one feel like a king.” Heated at the table with charcoal, Sinseollo, offers a universe of all things tasty from farms, oceans and forests ― seasoned beef balls, pan-fried croaker and watercress, abalone, sea cucumber, viscera, dried dates, roasted ginkgo nuts and more ― and its hearty broth is boiled on the spot. Many modern Korean restaurants do serve Sinseollo, but the dish rarely includes the ingredients required to impress the palate of fastidious kings.

The most expensive 10 course meal, at 130,000 won per person (about $150, without beverage, plus 10 percent VAT), has delighted epicures with dishes from the 17th century cookbook, “Eumsikdimibang.”
For “Daejanggeum” fans from Japan, curious restaurateurs and businessmen from around the world, the experience has been the closest thing to being invited to a Korean palace, in the form of a modern restaurant.