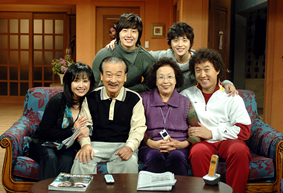 A scene from “Have No Fear, Kick High,” a fun twist on conventional society. [MBC-TV]

I am finally old enough to say that my dream is to be happy. I no longer want to become president or find a cure for a rare, childhood disease.
Being happy is a formidable task in and of itself. This is especially true in a world where every single person is fighting for his own happiness.
There are as many definitions of happiness as there are people. The problem occurs when people believe their standard of what it takes to be happy applies to everyone else as well.
This is why the so-called majority of people think that being happy with someone of the same sex is strange. Or that choosing to stay single past a certain age is anti-social. Or that being a follower of Marx is a sin.
Growing old means that you discover your anti-social side and seek out the fellowship of similarly-minded sociopaths to assure yourself that you’re not alone.
And, if you’re lucky, you achieve happiness.
Being happy is a costly task, as it takes most, or all, of your time, money and effort.
Japanese novelist Ryu Murakami, noted for his defiant style of writing, was aware of this tricky side of happiness when he wrote in his novel, “Sixty Nine,” “The only way to take revenge on those who hurt me is to live a happier life than they do.”
He added, “I will continue in this battle until they hear my laughter.”
Mr. Murakami is right. Our lives are short, and we are obliged to enjoy them as much as possible by laughing at life’s ups and downs instead of wasting time being grim or cursing our luck.
Finding true happiness is a tough task if you’re sensitive enough to recognize the absurdity of this society and of this world.
But rejoice. We have a sitcom on MBC-TV that will make you laugh out loud by twisting what is hidden in society’s rules. Some of my friends are starting to call the sitcom, “Geochimeopsi High Kick (Have No Fear and Kick High),” the one and only joy of their lives. Intrigued, I sat down in front of my television set one evening at 8:20 p.m. for the five-day-a-week sitcom. I ended up hunting for back episodes. I have been completely hooked by “High Kick,” the tale of a multi-generational family that appears to be normal but, in reality, is not.
First, there are the grandparents, who, at a glance, are the perfect grandfather and grandmother. In last Thursday’s episode, the grandfather, Sun-jae, the chief of an Oriental medicine clinic, showered his son with the wisdom of ancient Chinese saints.
However, viewers have seen him in earlier episodes reading vulgar novels and searching for pictures on the Internet under the cover of night.
The grandmother, played by the seasoned actress Na Mun-hui, is such a dedicated mother that she writes a book called the “Book of Farts” when she finds her son passing gas that is unusual in its thickness and frequency.
The son, Jun-ha, is a “trophy husband” to his older wife. He’s a “full-time stock trader at home,” meaning he is jobless. His wife is also a doctor.
Jun-ha’s brother is divorced with a baby, but he is falling for his ex-wife again. Jun-ha’s two sons are completely different. One is a handsome, straight-A student who is a little on the short side, while the other is practically a delinquent, yet with good looks.
This big family setting is a tool to present and orchestrate various kinds of human beings in one sitcom. The sitcom’s producers make “High Kick” a fun twist of what is considered normal in our society. The sitcom traditionally is not an immensely popular genre on the Korean TV scene, but “High Kick” is becoming the talk of the town, with audience ratings of over 20 percent. I guess many people agree that laughter is the best medicine in the ongoing battle to find true happiness.