Motorcycle couriers marching in a protest last year for better treatment with the Quick Service Human Rights Headquarters. The group is planning another protest soon. Provided by Yoo Jeong-in

They frequently hear desperate cries for help but they rarely a “thank you” or even a polite greeting. Motorcycle couriers, known as “quick service men” say they are paid like peasants and treated like scoundrels. Yet, they argue, if they did not exist the business community would have to create them or face chaos with every traffic jam. In a recent survey by the Korean Chamber of Commerce and Industry 80% of respondents said they would use a quick service man for an important package over other delivery systems.

Now, at last, the riders have a voice. It all started with an anguished letter from an anonymous motorcycle courier some months ago. Yoo Jeong-in, the head of an new advocate group for quick service men, is glad that the letter found him.
According to Mr. Yoo, the letter-writing motorcycle courier arrived in a sweat at a pharmaceutical building in Chungjeongno, central Seoul, after getting stuck in traffic. He was carrying a simple standard-sized manilla envelope. At the main lobby he was stopped and directed to a basement floor, which required him to go outside and take another entrance. He wrote that he was OK with that but when he re-entered the building, another security guard redirected him to a different entrance and told him to use the freight elevator. He was already late and told the guard that it was just an envelope. Even so, he was turned back with the answer that all couriers had to use the freight elevator in the back.
“The courier wrote that he felt personally insulted,” Mr. Yoo said recently at his office located on 8th street in Cheonggyecheon, downtown Seoul. “That angered plenty of riders who finally decided to speak up.”
Mr. Yoo used to be an “owner” who employed riders. It is a big change for him to become the head of a civic group that tries to help the 30,000 or so motorcycle couriers flying around the city. He started the movement out of anger in an attempt to protect his own employees. He sent protest letters to companies asking why his couriers were mistreated. One day a corporation sent him an apology and posted it on the Web site that he now runs under the title “Quick Service Human Rights Movement Headquarters.” He felt the Web site would help both owners and riders. 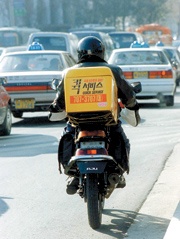