[Review]‘Borat,’ a fun ride across Americana

[Review]‘Borat,’ a fun ride across Americana 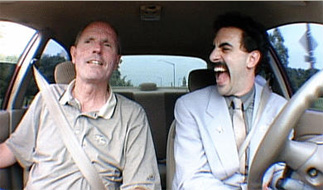 Borat (Sacha Baron Cohen) takes a driving lesson in ‘U. S. and A.’ on his quest for Pamela Anderson.

Much has been made of the “Borat” movie, in which British comic Sacha Baron Cohen travels the United States disguised as a bigoted mustachioed Kazakh reporter. It’s been praised as a biting commentary on everything that’s wrong with contemporary American culture, and Cohen even received an acting Golden Globe for his efforts.
Most of this hype is hot air. “Borat” may have several American characters with blisteringly illiberal opinions, but there are bigots all over the world. The real value of the film is that it’s simply incredibly funny ― a feature-length comedy act with the American population as the straight man.
At first Borat is supposed to film in New York, but an innocent encounter with “Baywatch” on the hotel TV sends him to Hollywood on a quest to make Pamela Anderson his wife.
Most of the laughs are simply absurd, based on Borat’s naive outlook on the world. Unable to afford a car, they travel the nation in an old ice cream truck, and when a gun shop refuses to sell them a firearm, Borat and his corpulent producer (Ken Davitian) decide on a bear.
Other highlights include Borat’s lesson with a humor coach and a naked fistfight and chase between the two Kazakh characters that runs through a hotel lobby and into a mortgage lenders covention.
But though “Borat” may not be a modern comic de Tocqueville, there’s still something a little deeper going on here. In Borat’s trip through the American South, the best stretch of the film, he takes a lesson in acting hip-hop from a group of black kids on the street, then wanders into a nice hotel with his pants riding low, using the phrases he’s newly learned, only to be kicked out. And when Borat hitches a ride with a group of USC frat boys, they prove that drunk American college kids really are the most obnoxious people in the world.
An etiquette lesson is intercut with Borat’s mistakes at a high society dinner in Birmingham to great comic effect. The wealthy hostess is surprisingly tolerant, until Borat announces his guest ― Luenell, a black woman Borat has ostensibly called from an escort service (in fact a fellow comic). After being kicked out, the two hit the town, and the interactions between Borat and Luenell are genuinely touching.
But what makes the film more than a tirade is that it’s not all critical. When Borat is down and out (his producer leaves him, taking “my money and my bear”), he wanders into a Pentecostal revival meeting, and the people are only too eager to accept and “save” him, and then put him on a bus to Hollywood. Yes, the speaking in tongues and fundamentalist preaching is odd, but the film doesn’t make light of the group’s willingness to accept and help a lonely man in need.
In the end, Pamela turns down Borat’s offer of a hut in his native land, but it’s just as well. He’s still learned much to take back to his home country ― replacing Kazakhstan’s fictitious “Running of the Jew” with the “Crucifixion of the Jew” after coming under America’s Christian influence, for example.
Perhaps that’s another reason “Borat” doesn’t come off as pompous. No matter how poorly behaved the Americans are, Borat is always worse.