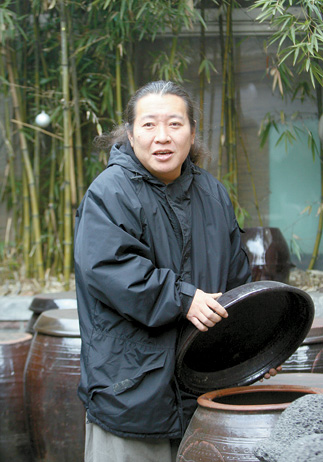 Deotjang is method by which a previous year’s jang (Korean sauce) is added to fresh soybean paste when making a new batch.
It’s a technique whose profile has been raised anew by Kim Jin-heung, 50, president of the Plantopia Project which promotes traditional foods and seeks to raise them to an art-form.
“The fungus in the old sauce adds a depth of flavor to the new paste,” he explains. “Every family should draw up a genealogy of its traditional sauce. Passing on the flavor of the sauce is a valuable inheritance for future generations.”
Mr. Kim, a Seoul National University philosophy major and civil rights activist, has been interested in deotjang since the late 1990s. He promoted traditional jang or Korean sauce as a way of supporting farmers during the foreign exchange crisis.
Mr. Kim founded Plantopia in 2005 with hopes of rekindling interest in traditional jang. He hosted the Korean Antique Food Art Fair in Yeoju, Gyeonggi province to promote his cause.
“While preparing for the fair, I discovered antique jang over 200 or 300 years old that has been kept in the distinguished jongga [a head family of a clan],” he said. “The secret was of their jang’s longevity was the deotjang method.”
This year Mr. Kim plans to focus on supplying and spreading interest in deotjang.
The process of making the jang begins with fermented soybeans (meju) that are placed in earthenware jugs. Brine is poured over them and they are left for about a month. This process should be completed between Dec. 15 of the lunar calendar and the first full moon of the new year to ensure the highest quality.
While it is best to use home made meju with brine prepared by using two-year-old salt, store-bought meju and salt can be used. When using pre-made products, lay glutinous rice at the bottom of the jar, or add cooked glutinous rice or wheat to boiled soy sauce to get rid of the bitter taste.
Also, use aged soy sauce instead of salt when seasoning to eliminate bitterness from the jang.
The deotjang method is used some time between four and 12 months into the process (depending on the region or family tradition), and should be done when taking the meju lumps out of the jar to make doenjang (soy bean paste). The remaining water is used to make soy sauce.
The deotjang technique is often used for doenjang and soy sauce making.
Gochujang (hot pepper sauce) can also be made in the mode of deotjang, but it is hard to find aged gochujang.
While aged jang is best obtained from acquaintances, it is also available online at www.plantopia.or.kr at 100,000 won ($106) for 2 kilograms.
Mr Kim says that when families record the aged jang used each year it will represent the start of a jang genealogy register. He says it will also be interesting to keep track of jang that has been parceled out to other families, which represents an extended family tree of jang.
Mr. Kim explained, “high-quality aged jang from other households can be added to the family jang to continue Korea’s outstanding jang tradition and to pass on high-quality flavors. This is not just a continuance of tradition but a developmental advancement that will be enjoyed by generations to come.”