Salsa surgeons do it with both hands

Salsa surgeons do it with both hands 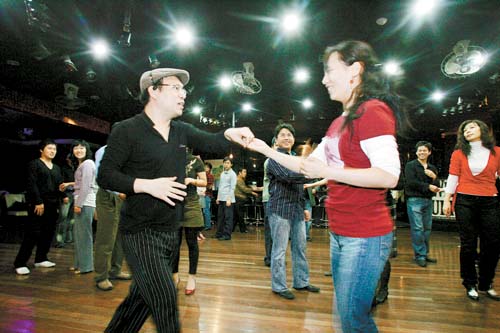 Dr. Byun Seong-hwan and a member of the salsa dance club he leads in a Latin dance hall near Hongik University. By Kang Uk-hyun

The lights illuminated the stage in the dance hall as a couple moved to the opening bars of a salsa song. The man, dressed in black shirt and pants, tapped his left foot and then stepped forward. Like someone dancing with her image in a mirror, the man’s partner repeated his every move in reverse.
With sweat running from beneath a jaunty cap, the man draws his routine to a close by rocking forward to the left. The atmosphere in the hall is electric and it crackles with applause as spectators cheer the dancer’s slick moves. The audience is clearly delighted but they probably don’t realize that the male dancer is a balding, middle-aged surgeon who used to weigh over 90 kilograms (200 pounds) and was plagued by health problems.
Rewind to the summer of 2001. Dr. Byun Seong-hwan was working at the Seoul Red Cross Hospital in Jongno as the institution battled through turbulent times. Only four surgeons were on staff at the hospital and he was bombarded with work. Dr. Byun, now 41, slept for less than four hours a day and never for more than an hour at a time because of constant duty calls from post-operative patients, the operating theater and the emergency room.
“My body was weak from overwork. I was suffering from fatigue and gaining weight,” Dr. Byun said. “When I was awake, I felt hungry and just ate.”
“Once, when I was in the middle of reserve forces training, I tried to put on a military uniform that was a few years old but I was too fat to button up the shirt. I had to hide the unbuttoned shirt I was wearing with a jacket.
“Then I walked 200 meters (218 yards) and I was so short of breath that I collapsed,” Dr. Byun said.
Dr. Byun’s poor health also interfered with his work. When he was operating, he would sweat profusely and a nurse had to constantly wipe his forehead.
“Once I was in the operating room with a doctor of anesthesiology in his 50s. I was sweating again and the doctor expressed concern about my health. I asked how he kept himself healthy, and he told me that he was a dancer.”
“I couldn’t help myself, I laughed. He was not the kind of person I could imagine dancing, especially considering his appearance,” said Dr. Byun.
Since the anesthesiologist was older than Dr. Byun, he said something complimentary to cover his laughter. Then Dr. Byun accepted his colleague’s suggestion that he too should learn to dance.
The anesthesiologist introduced him to a dance instructor and he began dance lessons. “She was a rather chubby woman, but her dance moves were charming. I was amazed,” he said.
After his lessons, Dr. Byun’s back hurt, but he practiced through the pain. “When I start something, I never give up. I have the pride of a surgeon,” he said.
After three to four weeks of dancing in front of a mirror, he began to think that his moves were graceful. “I surprised myself. I am short and my head is too big. I didn’t think I could be a dancer,” he said.
He continued to practice whenever he had breaks. One day he joined a salsa dance club via the Internet. In 2002, the club members were planning a party and they were looking for a practice hall.
Due to construction, there was an empty room in the hospital and they borrowed it for 15 days. To show their gratitude to the hospital, they performed in front of patients and staff in the hospital’s lobby.
“The patients enjoyed it very much. They were bored of staying in the hospital,” Dr. Byun said.
The patients were excited and began dancing in the lobby. The club members also had a puppet show and a karaoke contest for the patients.
“When patients are a part of such events, it becomes more meaningful,” he said. “It is not difficult for hospitals to throw such events, but it is something that’s rarely done.”
In 2003, he performed with his dance partner as an amateur during the Korea Salsa Congress. He wore a lobster costume and danced to “Under the Sea,” from the Disney animated film “The Little Mermaid.” This brought cheers from spectators, other participants and dancers.
In the same year, he went to Iraq as the head of a medical team dispatched to Baghdad by the Republic of Korea’s National Red Cross organization. After 8 p.m., they could not leave their hotel. To make good use of his leisure time he taught other doctors, nurses and ancillary staff how to salsa.
Before his team returned to Korea, they held a party for the Korean staff and the Iraqis that included a salsa dance. Dr. Byun said the reaction from the Iraqi crowds was overwhelming.
The dancing surgeon continued to perform from time to time in hospital lobbies while working at different hospitals. In the beginning, he was worried about how the hospital staff would react when they found out he was a dancer.
“I was working my butt off and nobody said anything. I was open and confident,” he said. “The director of the Red Cross Hospital was strict with work, but he did not mind me dancing in my leisure time.” 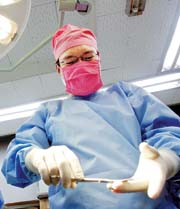 Dr. Byun said he was a bit surprised that the other hospital staff said nothing about his dancing. Now he is working at the Kangdong Catholic Hospital in the Gangdong district, southeastern Seoul and he recently put on a brief salsa performance in the hospital lobby.
“He looked different. I thought it was somebody else,” said Choi Hyun-suk, the head nurse at the hospital. “It was a surprise. He was fantastic.” Ms. Choi said she was interested in dance and used to enjoy jazz dance in the past.
“He danced really well,” said Lee Jun-hwan, a patient staying in the hospital. “His appearance doesn’t suggest a dancer. It was unique. In the beginning, I thought he was a lady’s man. I was envious. Even a real lady’s man would have been envious.”
Although the hospital staff was supportive, his family and some members of his church were concerned.
“A deacon at the church I attend told my wife that she knew a man who began dancing and soon he was cheating on his wife. They ended up getting a divorce,” Mr. Byun said.
Dr. Byun said that this was not the case for him. “I enjoyed my hobby and that made me happier with my family,” he said.
Dr. Byun said his wife initially thought he would stop dancing soon. “Although she wants me to spend more time with our family, she said to me, ‘To give up dancing now is not good for you. It’s not good for me,’” he said.
Now he weighs 70 kilograms, and is very healthy. Without dancing he believes that he would have turned to something like alcohol instead. Dancing is also an economical way of maintaining one’s health.
“Dance does not cost much, compared to drinking and playing golf,” he said.
He teaches salsa dance to the club members (cafe.daum.net/sdamu) every Saturday in a dance hall near Hongik University. The club now has 7,000 members, he said.
Regarding the increasing popularity of Latin dance and dancing in general in Korea, Dr. Byun said, “The culture has changed [and] so has the perception of dance. In the past, people were afraid to say that they danced for fear they would be accused of immorality, but now they can express their individuality. Now young people laugh if someone automatically associates dance with cheating.”

Salsa shares a heritage with the mambo, cha cha and rumba and to some extent they have similar step patterns. The steps result from the dancers’ reactions to the tempo of the music. Salsa is a clave (a percussion instrument popular in Cuba and Latin America) based music with two bars of four beats. Salsa patterns typically use three steps during each of the four beats, one beat being skipped. However, this skipped beat is often marked by a shifting of weight from one foot to the other. The word is the same as the Spanish term for a spicy sauce, or in this case a flavor or style.

A number of medical practitioners and doctors are interested in dance therapy, and the Korea Dance Therapy Association will be inaugurated on March 1. According to Kim Hyun-seok, a member of the association, it will initially admit medical doctors as its members and expand its membership to other medical practitioners and dancers.
“Medical practitioners have been using dance therapy in addition to music, art and exercise therapies to treat diseases in other countries,” Mr. Kim said. “Latin dance is very effective. It gives a lot of exercise even though the couples are dancing for a short period of time. It helps increase lung capacity and is useful for patients with emotional problems like adjustment disorders.”