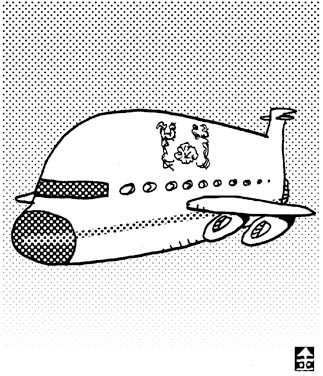 House Speaker Nancy Pelosi, D-Calif., has encountered opposition while trying to switch from the C-20 plane made available to former Speaker Dennis Hastert to a C-32 plane; a Republican dubbed the plane“Pelosi One” in an obvious slight. A C-20 seats only 12 passengers, not including five crewmembers, while a C-32 seats 45 passengers, not including 16 crewmembers.
Ms. Pelosi contends that her home district in San Francisco is four times farther away than Dennis Hastert’s home district in Chicago; the C-20 cannot make nonstop flights. Considering that the Speaker of the House follows the vice president in the line of succession, Pelosi argues that she is not overstepping her bounds to use the C-32, a plane used by the vice president and cabinet members.
British Prime Minister Tony Blair has been criticized for his call for a new plane dubbed “Blair Force One.” Prime Minister Blair uses the Royal Squadron, which provides air transport for the queen and top officials of the United Kingdom. However, the transport service is exclusive in name only ― members of the Parliament commonly use it. Furthermore, the plane is a 1967 VC-10. Prime Minister Blair has expressed interest in using other planes, but his security team advises against it.
Former president Syngman Rhee used a six-passenger L-26, and former President Park Chung Hee imported a C-54 in 1966. The current Korean Air Force One is the Boeing 737-3Z8 purchased by former president Chun Doo Hwan in 1985; however, this plane is used exclusively for flights to Japan. They use civilian air transport for other destinations because of the distance and the number of people traveling with the president.
The opposition party opposed a plan for a special airplane for the president. President Roh Moo-hyun points to the expense -- he has made the most foreign visits of all presidents. Including his current visit to Rome, he has made 23 foreign visits to 49 countries. The cost of each trip ranges from $855,000 to $960,000, so he has used a total of nearly $2.1 million for foreign trips. Supposing that a new plane can be used for 20 years, the cost of using that new plane would amount to $20 million, still double the amount of using civilian transport at $8.5 million.
However, a price tag cannot be put on national security and safety from enemies of the state. There is no reason to oppose the idea of a special plane for the president; however, the mind of the people remains a problem. It is hard to change public opinion when people are worried about the effectiveness of summit diplomacy.