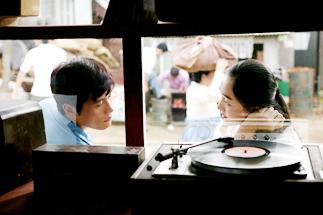 Once in a Summer

“Once in a Summer” is a romance fantasy that deliberately obscures the time and place in which it is set.
The film is a love epic that features an affair between two intellectuals, and it’s set “somewhere, sometime” in a turbulent phase of Korean history.
Seok-young (played by Lee Byeong-heon) is an unwilling student activist. He rarely attends student protests and does not care much for politics, at a time when most college students are politically active ― either from a sense of duty or as a way to seduce girls.
But when he joins his fellow students to help farmers in a fictional town called “Sunari,” he meets Jeong-in, the beautiful daughter of a communist who runs the village library.
The story taps into the ideological conflicts of Korean history while focusing on the couple’s love affair. But the tensions between them are all too familiar. In fact it wouldn’t be surprising to find a similar drama featuring two people surrounded by political upheavals in other parts of Asia such as Japan or China, given the vague timeline and the anonymity of the town.
There are some historical hints that pile up to form a general landscape of the nostalgic past that was rural Korea during the 60s and 70s, such as the black and white movie that villagers gather to watch in a playground at night, the absence of electricity, the awe of seeing a television for the first time or the old taverns the students flock to after protests.
However, there are some striking moments that are achieved by depicting history from the emotional point of view of individuals ― for example, the subtle transition from villagers watching a full moon in the sky to a scene where people gather around a television monitor to watch Neil Armstrong land on the moon.
The transition suggests the helplessness experienced by the couple, who are depicted as victims of history.
The film could have avoided harsher criticism if its characters had been developed with more nuance.
For example, it’s very likely that Seok-young’s character was a political pessimist who joined the student democratic movement out of social obligation or guilt because he was the son of a wealthy construction baron. But in the film one couldn’t really tell whether he was an edgy nihilist or a floundering intellectual who was trying to find a valid excuse to drink.
The director, Cho Geun-sik, could have improved the film based on Seok-young’s tensions with his father. There could have been more scenes like the one in which he accidentally vomits on his father’s black limousine after some heavy drinking.
It may be a bit of an overstatement to call this story a hallyu (Korean culture wave) film, but given that the film was sold to a Japanese producer for $4 million long before the film’s release, while it was removed from Korean theaters after a few weeks, it’s hard to deny that the film’s producer might have compromised the film’s political context to reduce its historical specificity in order to target a wider audience instead. Perhaps that’s just the commercial reality of Korean cinema today.