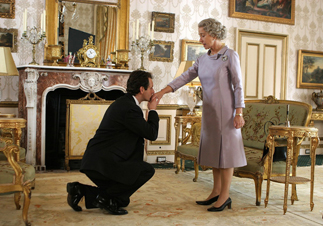 As a Los Angeles suburban teenager, in the fall of 1997 I was more concerned with avoiding any sort of permanent trauma in my freshman year of high school than I was with the death of some British celebrity. The media coverage insisted that I was missing out on something important, but at the time I didn’t think it would ever matter to me.
But I do admit to wishing I had paid more attention back then as I watched “The Queen,” a new dramatization of the conflict between the public, the media, a freshly minted Prime Minister Tony Blair (Michael Sheen) and the royal family over the death and public mourning of Diana, Princess of Wales ― a woman who was important to millions for reasons that remain obscure to me.
“The Queen” opens with Blair winning the 1997 election to become the first Labor prime minister in almost two decades. When the “great modernizer” meets Queen Elizabeth II (Helen Mirren), head of the Commonwealth and defender of the faith for the first time, conditions are frosty at best.
Then Princess Diana dies and, with the retreat of the royal family to their estate at Balmoral, mourners crowd the streets and pile flowers up in front of an empty Buckingham Palace, as resentment for the Queen’s behavior is stoked up by the press. Meanwhile, Blair is more popular than ever in the wake of a speech in which he calls Diana the “people’s princess.”
The most immediately noticeable aspect of “The Queen” is its almost seamless simulation of the key actors in that national drama. Excellent casting, acting, set design and costuming combine to make this one of the most believable docudramas in years. Whereas the use of actual documentary footage is usually a jarring reminder that a story is fictional, here it serves to heighten the reality and the drama.
Sheen plays Blair with great energy, but with balanced, tempered deference to the queen. One could almost see him taking the floor in Parliament. James Cromwell, Sylvia Syms and Alex Jennings are equally well suited to their roles as members of the royal family.
The real star here is Mirren, however, who channels Elizabeth almost unbelievably well in an understated and captivating portrayal. It’s not surprising she is the favorite to win the Best Actress Oscar on Sunday.
The weak links are Blair’s advisors, who too closely imitate the breezy political cynicism of “The West Wing.” Mark Bazeley plays speechwriter Alastair Campbell as a cartoony political villain, though he may seem more real to genuine Brits.
One can pinpoint the scene in which Blair must decide whether to support the royal family or abandon them and possibly lead to a greater “revolution” than even he had promised his voters. Perfect dialogue allows the two options to float on Sheen’s face for a split second in one of the film’s best moments.
But more than a political drama of a republic that never was, this is a personal yet public, respectful but often saddening story of a family that stood steadfast by a nation through war and strife, but whose stoic values were not equipped to handle a 21st century media mob. “The Queen” will be remembered as one of the best films of its kind.