The most perfect view with cantankerous tea

The most perfect view with cantankerous tea 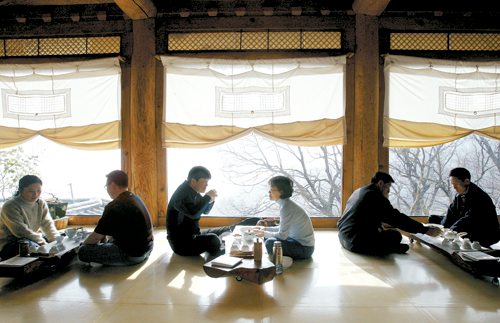 NAMYANGJU, Gyeonggi ― One of the giddy delights of traveling lies in the marriage of packing and imagination.
I hum as I lay out a new dress that I might wear to a fancy dinner or a perfect pair of sandals for a walk on the beach at sunset or a tote bag to enhance my casual-traveller look during the day. By the time I am all set, I am convinced that there is no point in traveling unless one is fully prepared.
This feeling was certainly present when I recently got ready for a day-trip to a famous hiking trail outside of Seoul. I prepared my hiking sticks, a matching pair of gloves and sports sunglasses, a 500-milliliter water bottle and an energy bar. Then I packed my oh-so-cute hiking backpack. I wanted to be ready to stride over any terrain and I was determined to do so with style.
The next day, I stood tall and proud in a pair of soft-shell hiking pants, a GoreTex windproof jacket with a warm fleece liner and hiking boots.
Up ahead was Mount Ungil, a small landmass above the Bukhan and Namhan rivers at the point where they merge into one and become the Han River in the southeastern part of Gyeonggi province. I waited at the entrance to the hiking trail.
“Hey, you look ready for some outdoor activity,” said the photographer who accompanied me on the trip. 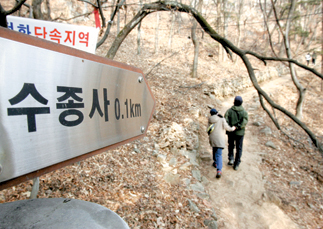 Beaming with satisfaction, I stepped forward to begin the climb. Mount Ungil is home to an old temple that Joseon dynasty poet Seo Geo-jeong once said had the most beautiful view in the country. I wanted to find out if that remains true today.
Mount Ungil is not very high, standing at 610 meters, or just over 2,000 feet. A dirt road is wide enough for cars to travel up some of its length, but the road soon becomes too steep and by midway it is marked by hairpin turns. Hikers who tried to force their cars up had to abandon them.
Although it was a weekday, plenty of hikers were climbing the trail, huffing and puffing in the sunshine.
One of them was Choi Jin-hwa, from Bucheon, west of Seoul. She looked well into her 40’s, very nicely dressed in a burgundy hiking outfit. Like myself, it was her first time.
“I took the subway for over an hour and then I missed the bus so I took a taxi to the entrance [to the hiking trail],” she said. She was already looking tired but she was excited about getting to the famous temple.
The temple is called Sujong, meaning water bell. King Sejo, the seventh king of the Joseon dynasty, gave it this pretty name when he visited in 1458. He and his men decided to camp out on Mount Ungil before they continued their journey back to the palace in Seoul. 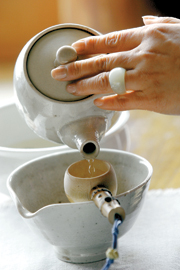 While everyone was asleep, the king woke to the soft sound of bells. He followed the sound and it led him to a cave. Inside the cave, the legend says, he saw 18 Arahats, or “Perfected Ones,” meditating. Water drops fell around them. The sound of bells ringing was the echo made by these water drops as they hit the stone floor.
Later on, a small temple was built here during King Gojong’s time. He named it Sujong temple but the public is currently prohibited from entering.
We finally arrived at the rugged rocky stairway that led to the temple. A big ginkgo tree stands in the front yard, guarding the temple. It is said to be at least 520 years old. Past the tree, a cliff edge offered a wide panorama over the mountains. It was magnificent. The view included two rivers, Paldang Lake and a long stretch of wintry looking peaks that included Mount Yumyeong and Mount Yongmun. No wonder Mr. Seo had waxed poetic about the place.
“It is a bit foggy today,” said Paik Seon-hye, a caretaker at the temple office. “It’s much more beautiful when temperatures abruptly drop during the night, and the following morning gives us a breath-taking view of the sun rising.”
We stood appreciating the view through the mist. There were also a couple of photographers who had climbed up to take pictures.
Aside from the amazing view, the temple has another feature that makes it worth the hike. It has a tea house called Samjeongheon where a Buddhist nun serves free green tea to thirsty hikers.
When we pulled open the wooden door the nun waved us away and simply said “Wait. No room.”
When it was our turn, she told us to remove our shoes and enter the room quietly. There were about 10 hikers squatting around several low wooden tables. She brought out a tray full of tea pots, cups and spoons, all made of bamboo.
“Since you are here, you should learn to drink the tea right way,” she said as she poured warm water into a wooden pot filled with green leaves. She said it was her duty to teach everyone who visits.
“The water should be neither too hot nor too cold,” she said. Although no one had told us to, we were kneeling in front of our table like the others in the room, waiting for the tea to brew. We stared out the window. One side of the tea house was entirely made of glass, offering the same amazing view as the observatory outside.
The Buddhist nun said we had to clean our own cups for the guests who would follow us. She winced at the sight of the big camera the photographer had brought with him.
“Honestly I don’t like it when media people come,” she said.
She said media coverage only brings more people to the mountain and it makes it hard for the temple to maintain a peaceful atmosphere.
“Some people think this is just free tea and they laugh and talk loudly,” she said.
The head Buddhist monk at the temple built Samjeongheon seven years ago. It was offered as a token of his appreciation for a life spent on the mountain and to share his blessings with everyday visitors. But according to the nun some people would be better off not coming at all, then she blushed quickly when she realized that she had been complaining too much to strangers. She went to another table and continued her tea lesson.
Yoo Jin-woo, a frequent hiker on Mount Ungil and Sujong Temple, said he would sit here for hours if the nun would let him.
“I won’t like it if too many people visit here either,” he said. 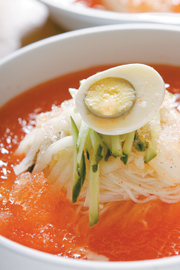 A few hours later, after finishing a full hike, it was time to fill our empty stomachs. There are plenty of restaurants on the road that leads away from the hiking trail, waiting for hungry hikers to drop by. There is gukbap (boiled rice served in broth), bindaetteok (mung bean pancake) and Western-style pasta dishes. We settled on a humble-looking restaurant with a surprisingly aggressive name that, in English, reads “Dongchimi Noodles that Kill.”
An old plate hung near the entrance said that it had originally been named Songchon Restaurant but the place renamed itself after so many customers exclaimed “It’s so good it’s killing me,” a typical way for Koreans to pay an exaggerated compliment.
“We are not part of a chain. We are the only original dongchimi (watery white kimchi) house around here,” said Kim Cheol-hwan, the proprietor.
They served a chunk of fresh crunchy dongchimi as a side dish. Rice vermicelli is served in a bowl filled with icy dongchimi water. It’s sweeter than the usual naengmyeon, or cold noodles, because of the sesame seed seasoning, and spicier because of the kimchi. But it’s a wonderful experience in the mouth because it is refreshingly cold while also quenching one’s thirst.
If you think the dish is too watery to fill satisfy your hunger, they also serve kimchi wang-mandu, or giant dumplings with kimchi filling.

Transportation Tips
By subway, take subway line no. 1 to Deokso station. From there take a local bus bound for Daeseongni. It is a 30-minute ride to the start of Mt. Ungil’s hiking path.
If you are driving, take the Olympic Highway to the eastern end in the direction of Misari, cross the Paldang Bridge and then take National Road No. 6. Drive until you reach the new Yangsu Bridge. Do not cross it. Instead, take a left turn toward the National Road No. 45 and follow the signs to Sujong Temple, which will appear within the next five kilometers (3 miles).
For more travel information, visit, www.nyj.go.kr, the tourism Web site for Namyangju city, or call the temple office at (031) 576 -8411. The temple only offers a Korean language service.