The 14 piano pieces on “Little Girl,” the first effort by pianist Jo Hye-yeon released on-line, took me down memory lane. Besides the fact that the tracks, including Chopin’s Waltz in D-flat major (Op. 64) No. 1 and Beethoven’s “Fur Elise,” were familiar scores from childhood, the little girl inside me identified with Jo’s shy, innocent performance.
This album is far from perfect, especially since the artist had no intention of it being so. Jo is an amateur musician who once had aimed at becoming a world-class pianist but decided against it during her mid-teens. Here, she chose her favorites from childhood to reflect her new outlook. This imbues her music with an energetic, joyful quality that is hard to miss.
The airy tone of the piano, the subdued pedaling, which allows for a moment of silence between measures, and the comforting melody all blend to mellow her listeners, while at the same time lifting them up.
Who says music has to be technically immaculate? The artist has fun with the piano, and that is what it’s really all about. 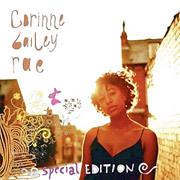 Listening to Corinne Bailey Rae’s self-titled debut album makes one feel like she’s having a late-night talk with an old friend about the ups and downs of love and life. The album opens with the tranquilizing “Like a Star.” By the time you get half-way through last year’s hit single, “Put Your Records On,” you will find yourself swaying to the song’s carefree and catchy tune.
This particular track earned two Grammy nominations last year, and contributed to Rae’s recognition on the international stage.
Those enchanted by Rae’s music will appreciate the eight new tracks and two remixes featured in the deluxe edition ― EMI reissued the album to celebrate its international success. A cover of Aretha Franklin’s “Daydreaming” is especially a delight to listen to.
Rae has taken the 1972 hit and turned it into one of her own. Her coquettish and mellow delivery sets it apart from Franklin’s lighthearted classic.
Rae’s experiences in a church choir, in the indie rock band “Helen” and singing at jazz clubs blend together to produce the album’s sound. Her tender, yet soulful voice lies somewhere between Norah Jones and Macy Grey. On the album, Rae collaborated with her husband, Jason Rae, who plays the saxophone on several tracks and adds spice to the music. Rae’s music may be a bit humdrum for some, but the rest will surely enjoy the tranquility it brings. Lack of variation is the album’s only downside. By Choi Hae-won