Raising sled dogs on the ice is secret formula for success

Raising sled dogs on the ice is secret formula for success 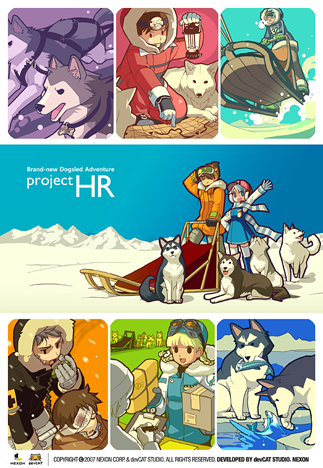 Project HR, a new player versus player game that crosses over into role-playing territory. Provided by Nexon

Nexon unveiled a new game on Monday. It is called Project HR and has been developed in great secrecy.
The game is a dog-sled racing game that takes place in the frozen Arctic. The game is rendered in three-dimensional graphics and it has a pleasant and friendly feeling that does not portray the terrain as stark, barren and desolate. Unlike regular player versus player (PVP) racing games, which focus on direct competition between the players, this game incorporates features that are more often seen in role-playing games.
For instance, one of the game’s major features is how the players must raise the sleigh dogs from infancy and can even breed them to produce better pups. The details of breeding the pups, however, were not demonstrated. Devilcat Studio, a Nexon developing unit allowed to operate independently, began developing Project HR in early 2006. For the past year, the development of this game was a closely held secret, even within the two companies, Nexon said.
“This game is different from other racing games that manipulate the vehicle or whatever object the user is riding, because the components that motivate the game players are living creatures. Therefore the player has to interact with the dogs, maintaining a good relationship with the animals like one would with friends or family,” said Kim Dong-gun, executive director at Devilcat Studio. “The ties that the player has to form with the dogs is what we focused on when we developed the game and we hope that it will differentiate it from other racing games.”
Devilcat Studio is also working on two other games besides Project HR. One of them is the online role playing game Mabinogi for the Xbox 360. Devilcat Studio developed the original online version four years ago. Project HR will begin closed test services later this year, although Nexon has not yet revealed an exact date. Nexon’s announcement of Project HR was an important issue for the game community because the company had not come up with any new titles recently.
The game couldn’t have come at a better time. The international polar year (2007-2008), which comes around every 50 years and is based on the polar seasons, begins in March. Later this year, teams from many countries will set off from different points and travel towards the South Pole. Their sleds will not be pulled by dogs, but ,all the same, there is the symbolic image of past races to the poles for Nexon to draw on, in which dog sleds were used.