Dancers, once freed from their shells,break all the rules

Dancers, once freed from their shells,break all the rules 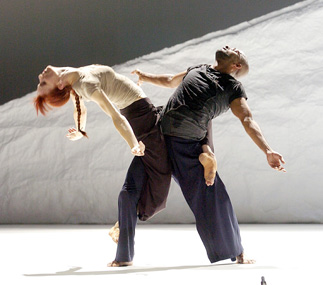 World-renowned ballerina Sylvie Guillem and the British dancer and choreographer Akram Khan will be presenting “Sacred Monsters” to a Korean audience at the LG Arts Center in Seoul starting Tuesday. The performance will close curtains on March 8.
Guillem, from France, is considered one of the most talented ballerinas in the world. She became an etoile (French for “star”) of the Paris Opera Ballet School, which is one of the highest positions for any ballet performer in the world. Guillem achieved this at the age of 19 in 1984 after performing in “Swan Lake.”
She was the youngest student on record in the 350-year history of the French school.
Currently a guest principal dancer with the British Royal Ballet, she is known especially for her “six o’clock position,” also called “ear whacking,” where she stands with her left foot on the ground and raises her other leg vertically so it is in the same position as the hands of a clock at six o’clock.
This position requires that a dancer be extremely flexible.
Guillem is considered to have broken the mold of classical ballet by incorporating the position into her dance.
Khan is a British dancer of Bangladeshi origin who specializes in Kathak, a traditional Indian style of dance.
Khan, in a press release, said the moment dancers break away from the accepted conventions of dance they become “monsters.”
He described “Sacred Monsters” as a work that strives for imperfection as it is defined by conventional ballet.
According to the LG Arts Center press release, “Sacred Monsters” is a term that refers to big stars in the performance business who, although treated like gods by the public, live like monsters, hiding their true selves away.
This performance is divided into three parts: Guillem’s solo performance, Khan’s solo performance and a duet. Between the shows the two dancers are planning to engage in serious dialogue.
Guillem, on her solo piece, tries to incorporate an Asian style of movement into Western ballet. Khan will be performing his swift yet powerful Kathak dance moves.
In the duet, which the artists say is the highlight of the show, they will attempt to speak the same language through dance, even with their extremely different styles; the slim-bodied Guillem, a master of Western ballet, and the muscular Khan, an expert of Asian dance.
The two dancers will become one body with many arms, like the images from an Indian legend.
The show runs 75 minutes without any breaks.
Tickets start at 40,000 won and go up to 100,000 won.